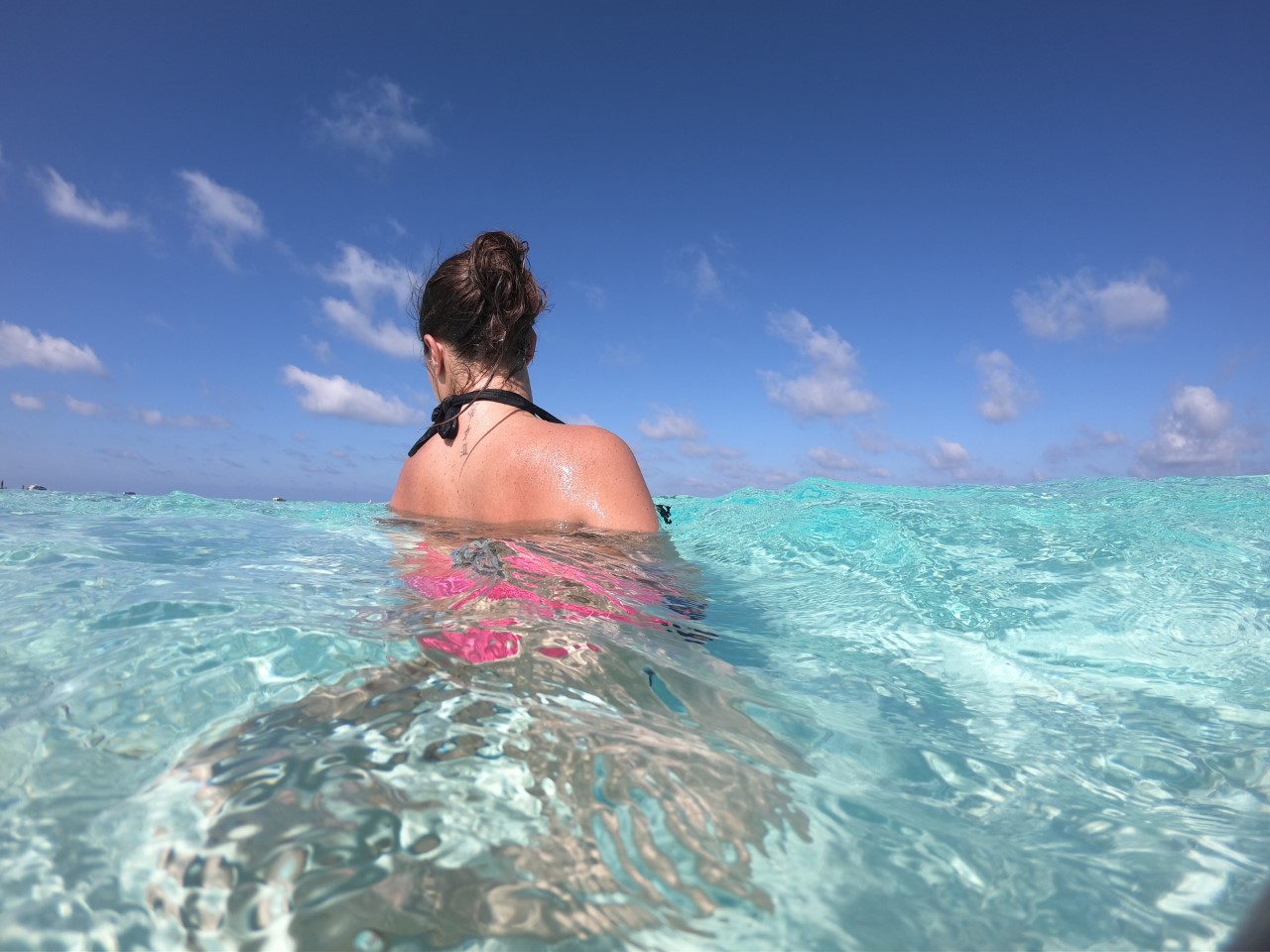 Who has never dreamed about the deep blue seas, turquoise reefs and white sandy beaches of the Maldives? I kept dreaming about it for years till we finally decide it was time to make this dream come true. To be honest with you in my dreams I saw myself also chilling on a water villa with pool but not every dream can come true therefore if your dream is going to the Maldives and you are ok with a guesthouse maybe this article could be interesting for you.
The main reason why we finally decided to book the flight to Male is because of a couple of dive instructors we met on Phi Phi Island. Mirla is Italian while Jaime is Spanish – both speak Italian, Spanish and English therefore taking the Dive Course with them is even possible if your level of English is not that good. They have just opened their Dive Centre called “Drop Dive Maldives” on Rasdhoo and I do highly recommend you give it a go if you happen to be on Maldives. 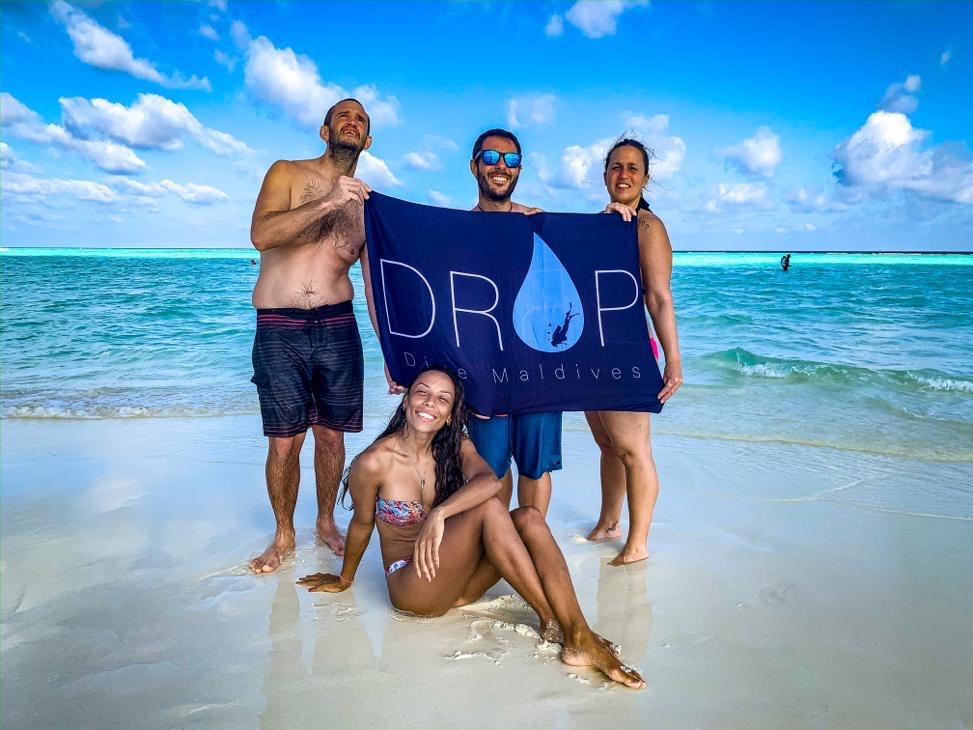 Thanks to them we did the Discover Scuba Dive on Phi Phi and thanks to Mirla´s patience I was able to dive despite my initial big fear. This was the reason why we did the Open Water Course back in Milan. After Phi Phi we kept in touch and as they told us they were off to the Maldives we booked the flight.

The capital is Malè with an approximatively population of 100.000 people (the population of the Maldives is said to be around 407.000 people), the local currency is called Maldivian Rufiyaa (MVR) & there are 4 international airports in the Maldives.

The official language is Dhivehi (an Indo-Aryan language) while English is their second language. The Maldivian education system has been following the British Standard since the 1960´s. Their culture is influenced by Sri Lankan, Indian and African elements.

Being a Muslim country please be aware that shorts that expose legs above the knees are still not completely accepted by locals (this apply to both men and women). Muslim pray five times a day and they have the Friday prayer which is done at noon and its obligatory therefore on Fridays everything will be close till around 2pm.

On July the 26th 1966 Maldives gained Independence from the British – this day became The Maldivian Independence Day. On November the 11th 1968 a Republic was formed (the first one was formed on January the 1st 1953 – after about 100years of Monarchy but it lasted not even a year). The Republic Day of Maldives is celebrated with parades and marches. The first tourists arrived in 1972.

General Information about getting to Malè & immigration

From Milan it takes around 11hours to get to Malè – please be aware that at the check in you need to show proof of the reservation of your hotel otherwise you won´t be able to depart.

Once you get in Malè be prepared to a long long queue for the immigration. Tourists are granted a 30day visa on arrival. To get one, you need to fill in a landing card which should be given to you on the plane – otherwise you do find them before the immigration booths.

It took us around 1 hour to get past the immigration control – by the time we managed our luggage was already waiting for us.

Rasdhoo – how to get there & general info

We had booked a guesthouse in Rasdhoo and therefore a local was waiting for us to escort us to the speedboat (from the airport to Rasdhoo there are two speedboats daily one at 10:30am and the other one at 4pm – from Rasdhoo to the airport the speedboats depart at 7:30am and 1:30pm – the guesthouse do sell the tickets at $40/person each way, but if you ask around you should be able to get it at $35/person each way). It took us around 70minutes to arrive to Rasdhoo which is the capital of the Ari Atoll administrative division (also known as Alif Atoll).

Rasdhoo is a tiny island (approx. 570m in length and 400m in width) with a lovely Bikini Beach – please be aware that on local islands there are designated beaches for people who want to swim in their bikinis. On the other beaches you must swim with your cloth.

Despite being so small Rasdhoo has everything you need such as groceries, gift shops, cafes, bank and atm (the service fee is always 100 ryfiyaas – it doesn’t matter how much money you’re going to withdraw), a post office, a hospital, a police station and two restaurants.

Please be aware that Rasdhoo is very tiny and therefore there is not much to do apart from diving, snorkeling, sunbathing and fishing. We spent 14days on Rasdhoo and we loved it, but we did loads of dives and we love sunbathing. If you do get easily bored of the above-mentioned things you should probably stay maximum 7days

On our stay we tried some local dishes such as “mas huni” – a typical Maldivian breakfast which consists in diced smoked tuna mixed with lime, onions, pepper and coconut along with a boiled egg & “roshi” or “chapati” which is a flour based flat-bread. I must admit that it is good, but I would have appreciated it more if served at lunch or dinner time.

There is a lovely café which has a variety of Maldivians so called “short eats” such as gulha which are small deep-fried marble-sized balls filled with a mixture of tuna, finely chopped onion, grated coconut, and chili. (turmeric, lime juice and chopped curry leaves can be added as well),

Bis keemiyaa is similar to a spring roll filled with a mixture of onion, garlic, chili, boiled egg, cabbage and pepper 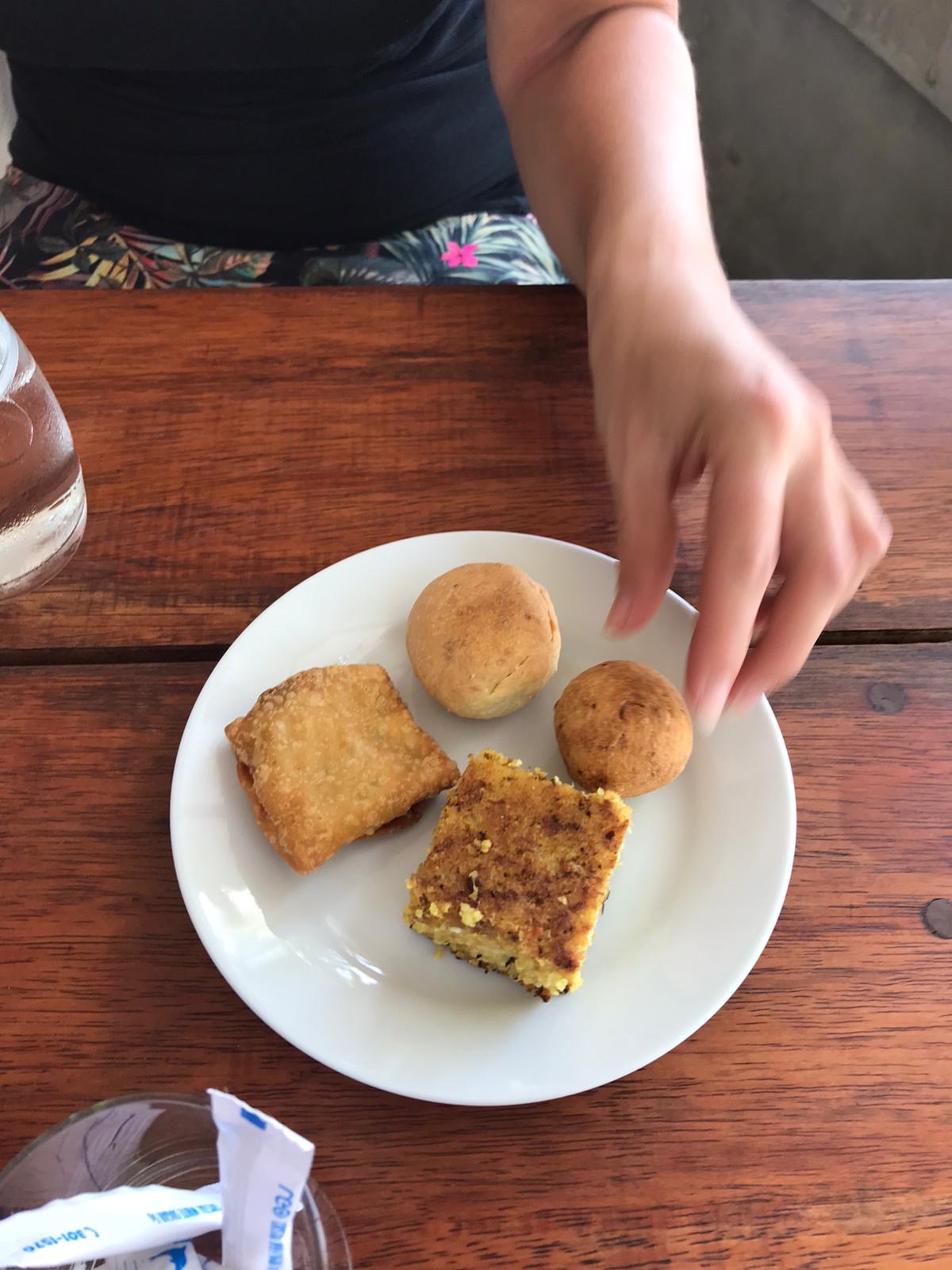 If you think (we did!) you are going to eat a lot of fish while on Rasdhoo you will be disappointed. Of course, you will find fish dishes, but they will cost you more than back home – the only fish we had was on New Year’s Eve which we celebrated in a guesthouse on Bikini Beach.

The night started with a happy hour – and went on with a huge buffet on the beach, it was full of tomato and cucumber salads, a BBQ of chicken and fish (squid, crab and octopus), fruit and pastries. Please be aware that being on a local island means that no alcohol and pork will be served. It was a nice way to celebrate New Year’s Eve (please be also aware that our New Year’s Eve does not correspond to Maldivians New Year’s Eve). 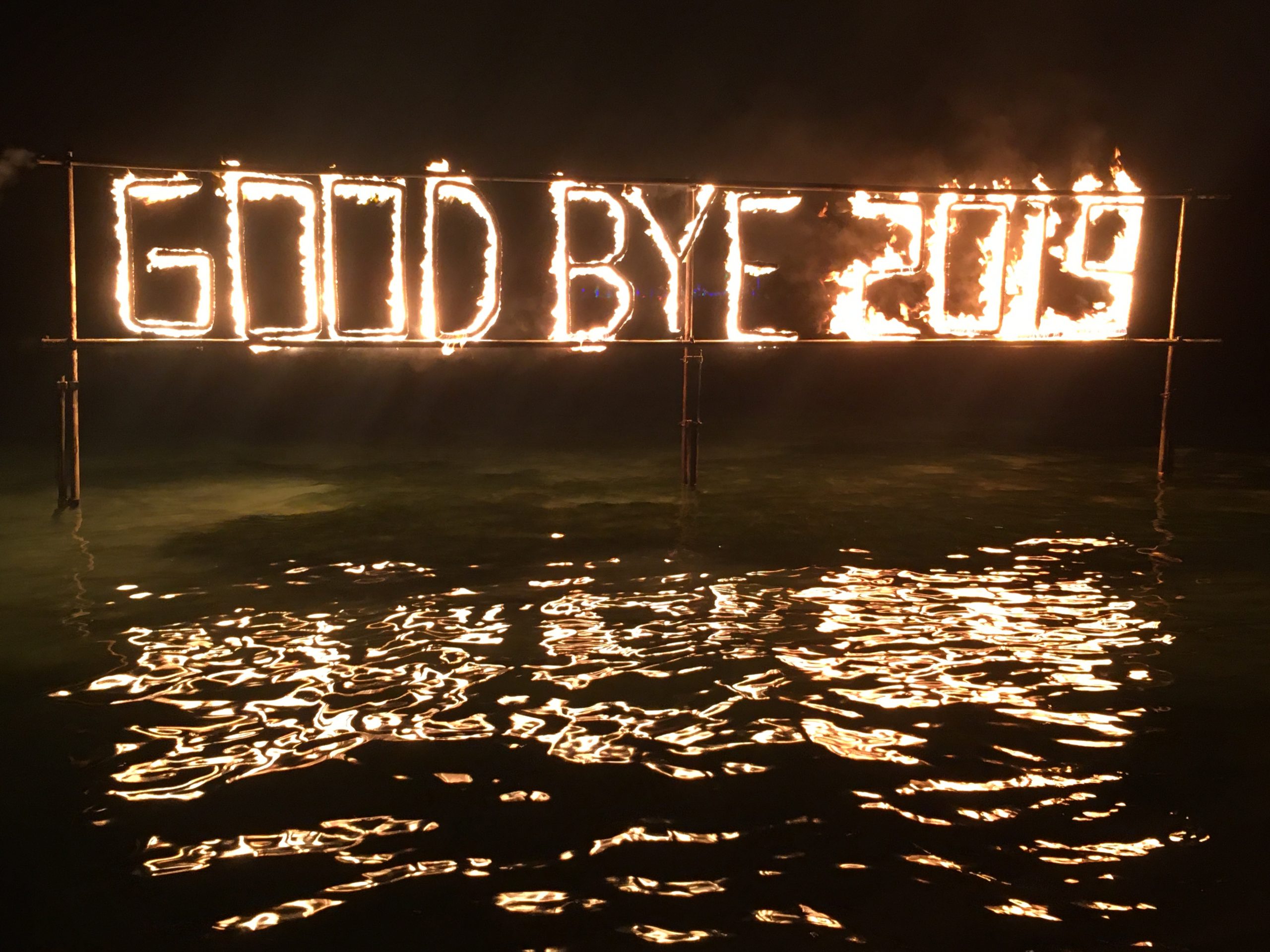 After dinner a group of Maldivians performed Boduberu which is a dance song (bodu means big and beru means drums) which consists of one singer and a lot of drums. We were told that back in the days the head of the drum was made by stingray or manta skin. Thank god nowadays it is made by something similar to canvas. After the fireworks the Disco started.

Maldives is home to over 2000 species of fish ranging from reef fish, Mantas, reef shark and the gorgeous whale shark. Every Dive on Rasdhoo and surroundings was amazing – the fabulous thing of Rasdhoo is that every Dive (they have loads of Dive site) is close to the island therefore you dive in the morning and you have the complete afternoon to yourself. These are some of the Dive sites we visited during our stay – please be aware that in all sites you will see loads of colorful tropical fish and corals (I am writing only what was my highlight of each dive otherwise the list would definitely be too long).

Rasdhoo Reef: a big stingray, an eagle ray, blacktip sharks and a turtle.

Madivaru reef: eagle rays, black tip sharks and the grey reef sharks. I used to have issues in distinguish these two sharks – finally I figured out the difference.

The blacktip reef shark can be distinguished by the black tip on the first dorsal fin as well as black tips on the remaining fins.

The grey reef shark has a distinct wide black margin on the entire trailing edge of the caudal fin and the first dorsal fin is either grey or edged with white.

The Caves: a turtle and white tip sharks.

The Wreck reef explorer (consists obviously of a wreck with a depth that goes from 5-16m): a huge gorgeous manta.

Manta Point is a shallow site with a depth of 12m and as the name suggest the Mantas were the big highlight.

The Madivaru Corner & Channel: where we got as close as we have never been to a turtle.

We did our first night dive at a wreck – the best thing ever was looking & being able to get really close to parrotfish sleeping (they can grow up to 120cm), tiny little shrimps & the plankton. This was an unforgettable experience despite my fear of diving in the dark (we did have a torch with us but how much light can three torches possibly make in an ocean?).

Please be aware that there is a site where there is the chance to see the hammerhead shark – we decided not to go because they told us that it is a dive in the middle of the ocean where there is nothing to see a part from plankton (which you can see on a normal night dive) and that the chances to actually see these gorgeous sharks are 50/50. Said that this will be one of the first dive we will be doing if we will be back.

A Day @ the sandbank – Finolhu Island

If you have time (you should definitely) just spend a half day or a full day on the Sandbank which is on Finolhu island – really close to Rasdhoo. Here you can find what they call blue hole where while snorkeling you can see a little reef with loads of colorful fish such as the trigger fish and a lot more. We also happen to see a tiny little ray.

Please be aware that being not inhabited there is nothing you can buy on the island therefore you should stop at one of the groceries shops on Rasdhoo to buy at least some water to bring along with you. There are only three beach umbrellas on the beach therefore bring lot of sunscreen with you. At low tide from Finolhu Island you can walk to the close by little, not inhabited, island of Madivaru.