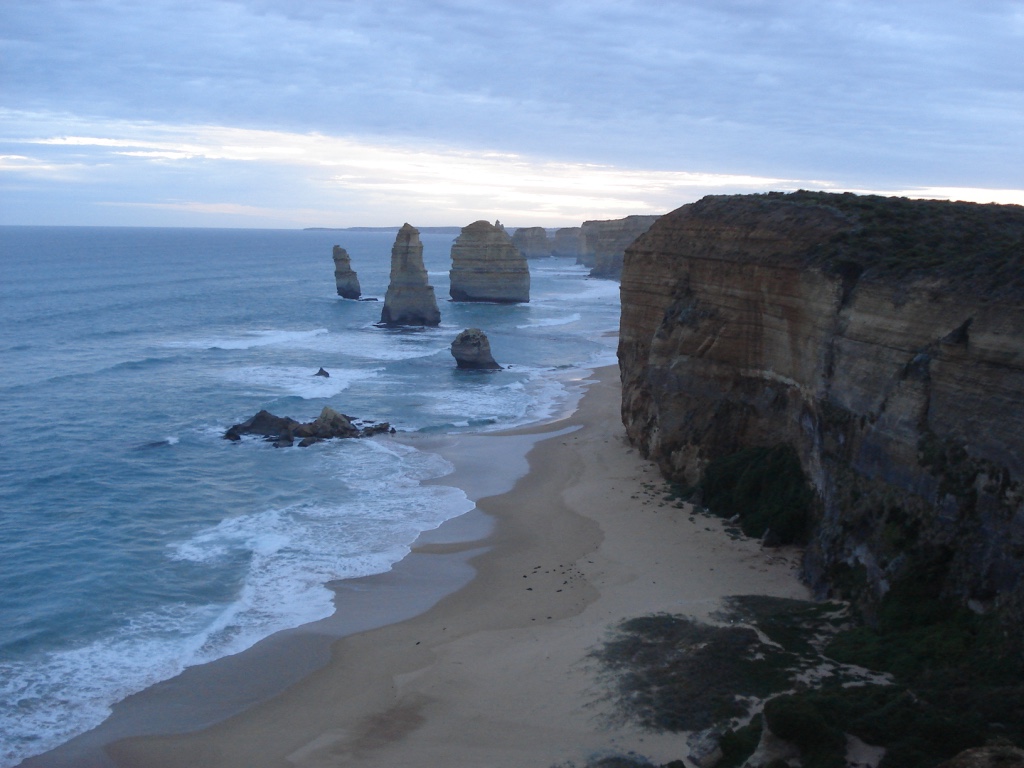 Adelaide to Melbourne (via The Great Ocean Road)

This is really a lovely road trip to do. I won´t be talking about Adelaide & surroundings like beautiful Kangaroo Island (if you wish to read about it please go to the “Adelaide and Penola” article). Let´s start saying that if you are running out of time you should still consider 3 days to complete this route. In this case you obviously won´t make it to see everything there is to see but at least you should have all the highlights covered. I do suggest you rent a car which is the best way to do it – there will be an extra charge for the fact that the drop off point is different from the pick-up point, but I reckon that this is the best way to discover this beautiful area.

Once you leave Adelaide you will cross the Murray River which is Australia´s most important inland waterway – it also forms most of the boundary between NSW and Victoria. Famous for its outdoor activities and water – based recreations – it meanders for 650km through South Australia.

It has a long history since the trees and wildlife of this area were very important for the Indigenous Meru communities. The river was also the trading and transport route for European settlers.

The Grampians National Park (also known as Gariwerd) is characterized by a rich diversity of fauna and flora, unique rock formations, Aboriginal Rock art, bushwalking and rock climbing. It was proclaimed a national park on July the 1st 1984 and listed on the Australian National Heritage List on December the 15th 2006. We visited some of the most famous attractions of the area such as The Hollow Mountain, MacKenzie Falls, The Balconies and Reeds Lookout and the Pinnacles. There is a lot of wildlife that can be encountered such as koalas, kangaroos, snakes etc.

We started with a short 3.2km hike mostly over rocky formations to reach the Hollow Mountain which takes around 1 1/2 hours – at the top the views are amazing.

The MacKenzie Falls is one of the largest waterfalls in Victoria – the walk is 2km return consisting of 260 narrow steps.

The Balconies and Reeds Lookouts

The Balconies and Reeds Lookouts are accessible to everyone and the trails both depart from the same carpark. The Balconies trek is a 2 km long walk which is rewarded with panoramic views of Victoria Valley and the surrounding ranges. From the summit of Reeds Lookout (100m trail) you will also have panoramic views over the entire Victoria Valley, Victoria Range, Serra Range, Lake Wartook and the Mt Difficult Range.

Our last sight was The Pinnacle – there are three options varying in distance and difficulty to reach the summit. The first option and the easiest one departs from the Sundial carpark and ascends to the Pinnacle via Devils Gap. This trail is 4,2 return and takes around 2 hours. The second option is a more challenging one and departs from Wonderland carpark and ascends via the impressive Grand Canyon before rising to the Pinnacle. The third option and the most challenging one starts at the Halls Gap caravan park and will take around 5 hours to be completed. The view at the top will reward you for all the effort: from the summit you can admire Lake Bellfield and all the rock formations for which this stunning National Park is famous for.

After the Grampians National Park, we drove further South to Warrnampool – famous for being the start or the end (depends from where you are coming – in our case it was the start) of one of Australia´s most famous drives The Great Ocean Road – an Australian National Heritage listed 243km drive that ends (or starts) in Torquay.

In 1917 the Great Ocean Road Trust was established to build this road by soldiers that came back from WWI (during WWI 60.000 Australian were killed and 160.000 were wounded) in order to provide them employment. Between 1919 and 1932 a total of 3000 soldiers worked on this project (GOR).

On this drive, winding along the dramatic coastline of the Southern Ocean on Australia’s South East coast, you will be able to see several famous landmarks such as the London Arch – this natural arch situated in the Port Campbell National Park was once a bridge (that is the reason why it was called London Bridge until 1990 when on the evening of January the 15th the part connecting what is now called the London Arch to the mainland collapsed. No one was injured but two people remain stuck on the other part and had to been rescued hours later by a helicopter). 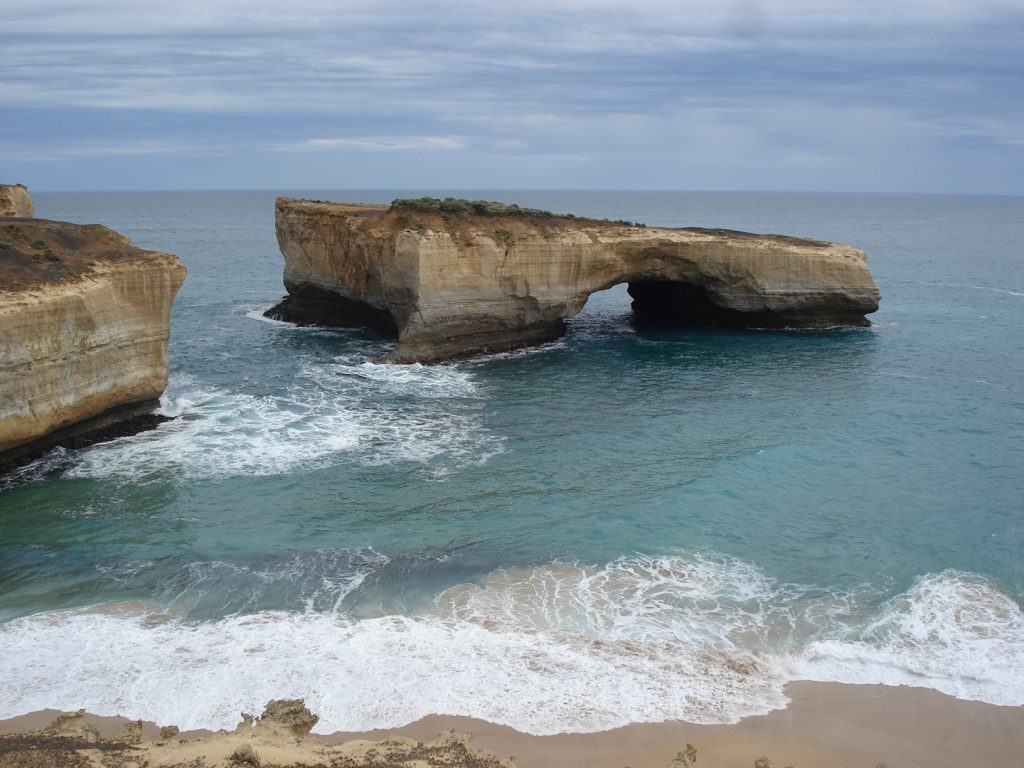 The Lock Ard Gorge named after the clipper ship wrecked here in 1878 (which arrived to Melbourne from London) is another very famous landmark. We were told that out of the fifty-four passengers and crew, only two survived. There are three easy walks to discover this place. Let´s start from the shortest one which is a 900m return long walk along the coastline, the second one is a 1,4km return walk called the wreck of the Loch Ard while the third one, the longest one covers a distance of 3,2km return and allows you to discover the blowhole, thunder cave and broken Head. 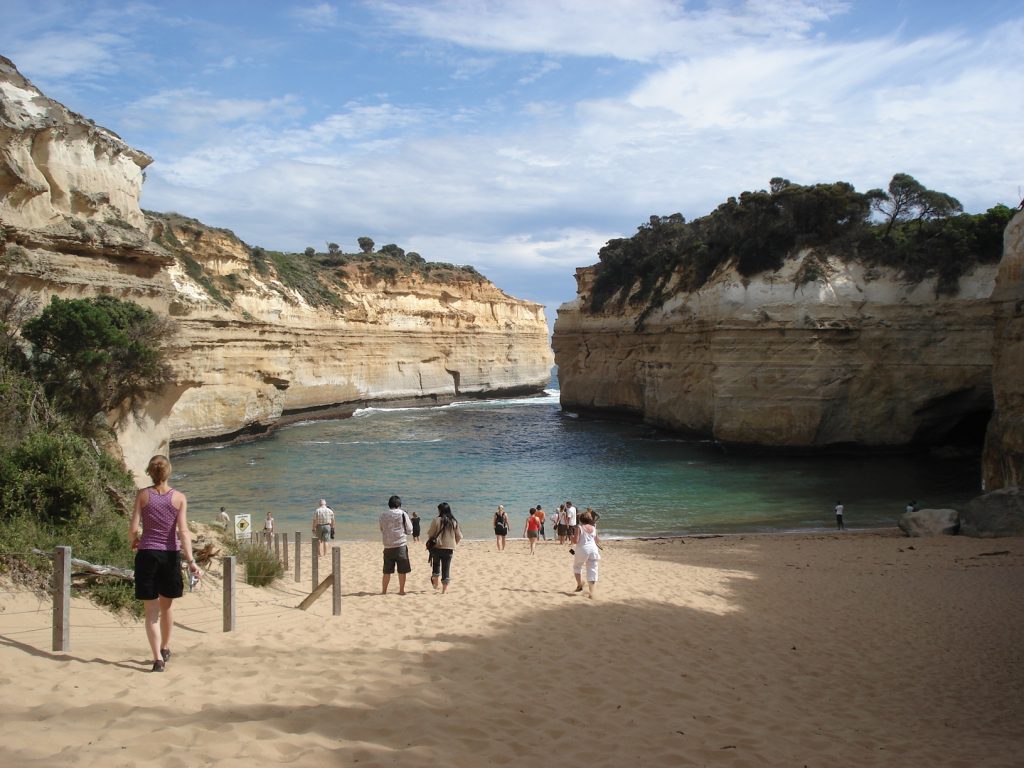 The Bay of Islands Coastal Park

The Bay of Islands coastal park is another highlight of this drive. It consists of a 33km long coast of soft limestone rock that began forming during the Miocene Period (around 20 million years ago) when this coastline was under the sea. Formations of the limestone rock began under the sea with the deposition of marine animal´s skeletons. During the Pliocene Period the sea level dropped exposing the sea floor but from about 18.000 years ago the level rose again reaching its present level. Cliffs are formed when the sea undercuts the edge of the land, causing it to collapse. Blocks remain as stacks.

The coastline continues to retreat about 2cm/year. If you have time stop at the Bay of Martyr which is still part of the Bay of Islands coastal park and has two easy walks to discover the area.

Another famous, probably the most famous landmark is the Twelve Apostles which is probably the most famous landmark along this drive. But how where they formed? Weather conditions erode the limestone forming for example caves, then arches and when due to further erosion the arches collapse – rock stacks remain. Despite being called Twelve Apostles please be aware that the number of stacks that are standing is seven. Please consider that there is the option of viewing the Twelve Apostles from the sky booking a 15 minutes helicopter flight which should cost around AUD145. I didn´t do it therefore I am not able to tell you if the it´s worth it.
If you wish to visit this gorgeous area in a different way you should consider taking part at one of the numerous guided Great Ocean Walks. If you are interested have a look at https://www.greatoceanwalk.com.au/

Before heading to Melbourne, we did make some other stops. The Gibson steps and the beach below were our first stop. They told us that these 86 steps were cut out by a local tribe called Kirrae Whurrong – it is also said that they started to get used in 1869 when Pioneer Hugh Gibson built a Homestead using the stairs to access the beach. From the beach you can really admire this coastline cliffs and you really get the feeling of how giant these limestone stacks that rise out of the sea are.

Please be aware that the beach is closed during bad weather since it can be dangerous – therefore you are better off checking the conditions before heading there.

The Otway Fly Tree Top Walk is in my opinion another must do. It consists of a 600-metre long walkway, 25 meters above the forest floor in the Otway Ranges. It took 10 months to be completed and was opened on September the 8th 2003. This Walk gives you a breath-taking birds-eye-view of the Otway Ranges which I was told have the highest rainfall in Victoria with an average of 2000mm annually. On this walk you can also see some gorgeous trees such as the Mountain Ash which is the world´s tallest flowering plant, the Myrtle Beach species and the Soft Tree Ferns (said to be prehistoric). If the Tree Top Walk is not enough and you want a thrill you can book the Zip Line tour.

If you are not running out of time I do suggest you stay overnight to have time to wander around the Great Otway National Park which features rugged coastlines, sandy beaches, rock platforms, windswept heathland along with tall forests, ferny gullies, magnificent waterfalls and tranquil lake sand.

Before visiting the “surf addicted area” of this drive you will be passing by The Great Ocean Road Memorial arch which commemorates the construction of the Great Ocean Road and symbolizes the sacrifice made by soldiers who served in the WWI (1914-1918). Interesting to know is that the Arch that can be seen nowadays is the fourth one erected: the first one was erected in 1939 and was replaced a few times over the decades, one was even destroyed by a fire on February the 16th 1983.

Our last stops are a must for all surf addicted. As you probably be aware of the area of Torquay is very famous to surfers for at least two reasons.

The first one is Bells Beach ( 14km South of Torquay) which is Australia’s premier surf beach where surf competitions are held annually for experienced surfers from around the world – I reckon the best place to take a surf lesson or to go surfing.

The second one is the Surf City Plaza in Torquay which is an entire precinct dedicated to surfing consisting of the Surf museum and of shops of all top surf brands such as Quiksilver and Rip Curl both founded in 1969 Torquay.

To read about Melbourne and surrounding please refer to “A week in Melbourne” and “Melbourne Escape – Phillip Island, the Mornington Peninsula and French Island”