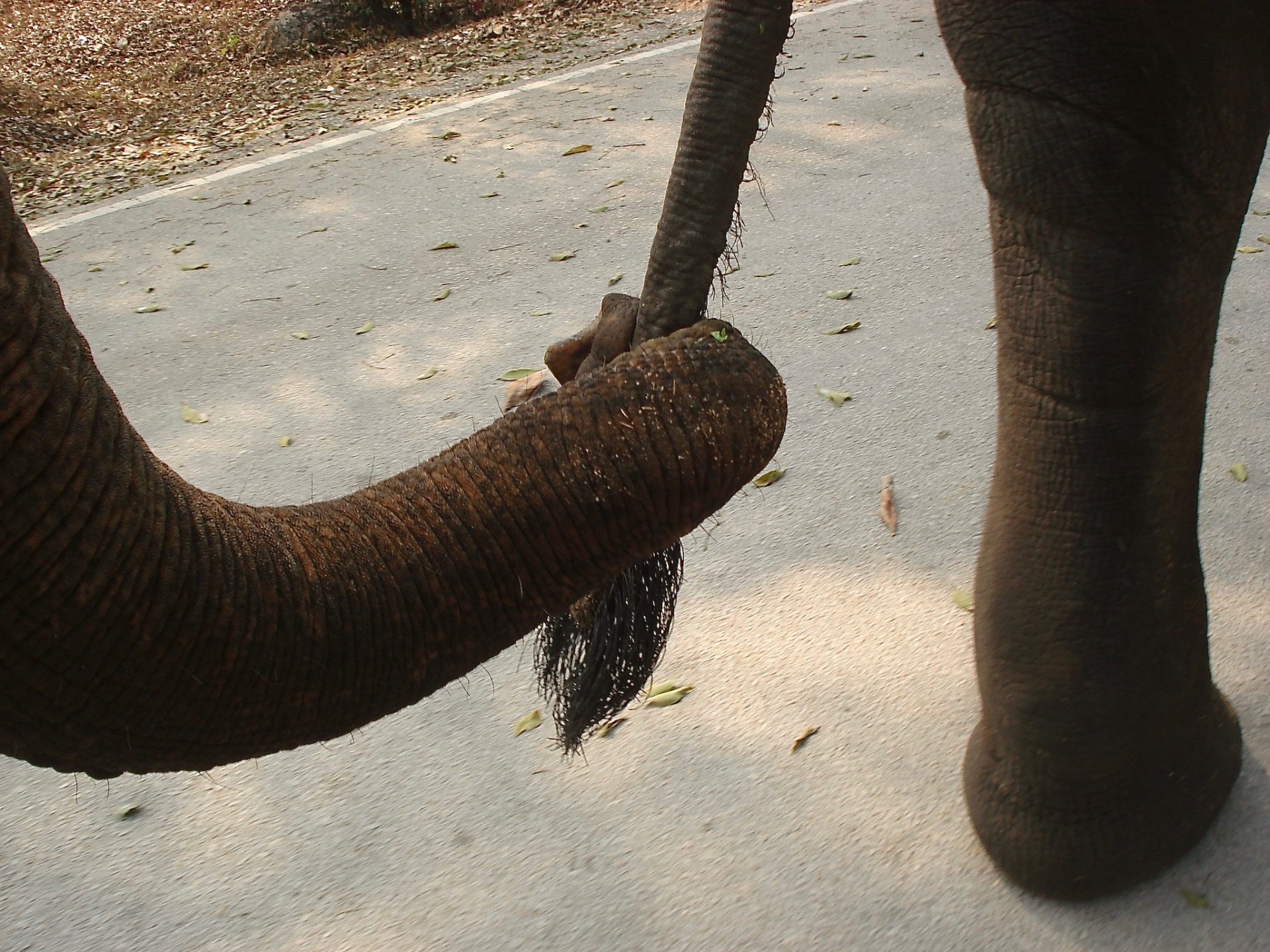 On my way back from my gorgeous experience Down Under, in New Zealand and Fiji I made a three weeks stopover in Thailand.

The main reason for this stopover was the three-day Mahout Training Course in Chiang Mai which consisted in learning mahout commands, get involved in the Mahout´s life such as bathing and brushing your “own” elephant, stay two nights in a traditional Mahout house and perform in the elephant show.

This course takes place at the Thai Elephant Conservation Center (or National Elephant Institute) in Lampang Province which was founded in 1993 under Royal Patronage and is the World´s first school for training.

All the elephants are brought back to the forest after each activity and for the night and get collected every morning. It is such an experience to bare back riding on elephant and seeing these enormous animals so close.

This Conservation Center is also known for the Elephant Hospital which helps all injured or sick elephants at no costs. It has even a free mobile vet clinic for inspecting and treating elephants at their home. Sophisticated scientific research, artificial insemination and a frozen sperm bank are included as well. If you are lucky enough you get the chance to see baby elephants as well.

In Chiang Mai I booked a cooking course and one of the highlight was the Fresh Market we went to buy all the ingredients for the cooking class. I remember staying in front of a spice vendor surrounded by such a huge amount of smells and colorful spices. The cooking class was very interesting – everyone could choose 4 favorite dishes to prepare. I love cooking and I love diverse types of foods therefore I loved to prepare Thai food. I prepared spring rolls, chicken in coconut milk, Green curry with chicken and chicken with cashew nut – and it was delicious. If you like cooking I do suggest you take such a cooking course – everybody cooks their own meal, it lasts up to 4hours and after that you can obviously eat all the food you have cooked.

From there I went to The Golden Triangle which is in the Chiang Rai Province. It is the meeting point of Laos, Myanmar (Burma) and Thailand and it has been one of the main world producer of opium since the 1950s. From the 60s till the 90s most of the world´s heroin came from the Golden Triangle.

If you are interested in the history of opium around the world and in the Golden Triangle area you can visit the Hall of Opium Museum. Apart from that you can learn about the process of production, the effects of opium smoking.

We departed from Chiang Mai – the first stop was Mae Khajan hot springs before heading up towards the stunning Wat Rong Khun (The White Temple) due do its dazzling white colour inlaid with mirrored glass. At the road side of the hot springs there are no facilities for bathing in the hot spring water although there are a few pools where you can dip your feet in. Wat Rong Khun is owned by Chalermchai Kositpipat (a local artist), who designed, constructed, and opened it to visitors in 1997.

After lunch we got on a boat on the Mekong River to the Laos island of Don Sao. Do not forget to grab your passport otherwise you want to be able to do it.

On the return we stopped at an Akha and Yao hill tribe village.

Akha people are famous for their exotic and beautiful costumes. Akha originated in Tibet and Southern China – around 1905 the first immigrant arrived to Thailand. Their religion says exactly how everything must be done and everything that is being done in a unique way is believed to lead to disasters.

The Yao in Thailand are a subgroup called “Mien” of the greater Yao family. They inhabit southern China, Laos and northern Vietnam. In recent years they have been converted to Christianity and Buddhism. The Yao tribe is known for their distinctive costumes – especially for the silver neck-rings with silver chains extending down back decorated with silver ornaments which are used by the women on special occasions.

I spent a few days in Bangkok which I personally did not like that much. Bangkok (Krung Thep Maha Nakhon or Krung Thep) is the capital and most populous city of the Kingdom of Thailand. Obviously, I went to some markets which were crowded but the thing that personally did drive me insane was being constantly followed by vendors who wanted to sell me everything. ”Arguing” on the price was another thing I did not like that much but this, I mean, is my problem. I know loads of people who love going to shop there and I do not like markets in general. Even though I did not like it I think that if you are in Bangkok it is worth a visit.

Bangkok has 50 districts – a famous and interesting one in my opinion is Phra Nakhon District. Adjoining there is the Grand Palace (Phra Borom Maharatchawong) which construction began in 1782 at the order of King Buddha Yodfa Chulaloke (Rama I). It has been the official residence of the Kings of Siam (former name of Thailand) since 1782. The king, his court and his royal government were based on this ground from 1782 to 1925. Nowadays it is used for royal ceremonies and state functions. The Grand palace is made up by numerous buildings built over 200years of history and under other many kings.

North of the royal residence is the Royal Monastery of the Emerald Buddha which is one of the most venerated sites in Thailand. It is enshrined on a Busabok (a golden traditional style throne made by gilded-carved wood) and it is always cloaked in royal robes (one for each season – summer, rainy season and winter). At the beginning of each season it is the King himself who proceeds with the changes.
The Emerald Buddha is carved from a block of green jade and was first discovered in 1434 in Chiang Rai. At the beginning they thought it was covered in plaster but when the plaster on the nose had flaked off they saw green stone underneath and thinking it was emerald is being given the name Emerald Buddha. The image moved from Chiang Mai to Laos before being taken to Bangkok in 1778.

My favorite attraction was the Reclining Buddha which with his 46m length and 15m heights modelled out of plaster around a brick core and finished in gold leaf is impressive. You can find the reclining Buddha and an enormous collection of Buddha images in Wat Pho. Its official name is Wat Phra Chettuphon Wimon Mangkhlaram Ratchaworamahawihan. Prior to the temple this site was known as a center of education for traditional medicine.

Before heading to Phuket where I spent my last 10 days (got on a bus in Bangkok) I decided to visit the Wat Pa Luangta Bua Yannasampanno Forest Monastery Tiger Temple Kanchanaburi which was established in 1994. It started as a wildlife center and with an injured jungle fowl. The first tiger cub arrived in February 1999. Her mum was killed by poachers and she was bought by a wealthy Bangkok resident who ordered her stuffed. When she arrived at the Monastery she was already injected with preservative formalin. Unfortunately, she did not make it and died in July 1999. From that time onward many other cubs were intercepted from poachers and brought to the Monastery were large open-air enclosures were built to prevent them from killing the other animals.

So saying that I have to admit that I did not really know what to expect by the time I booked my tour and that it was said seeing those gorgeous animals chained –  to me they appeared drugged.

I know that in 2016 police and wildlife officials began an operation to remove all living tigers from the Tiger Temple and I have read very sad things about this place and what was found during this operation but I prefer not to go into further details. If you wish to read more about this you will find plenty of articles on the internet

I had so many places I wanted to visit from Phuket but unfortunately, I did not manage to do anything. This was since I got sick and with sick I mean that I had to run to the toilet a lot of times. I guess it was because of the water which I did not drink but which was used to wash the fruits (I have never had such amazing tropical fruits before), to wash the cooked rice etc. Therefore, I had to eat just canned food. Obviously, this means that I can´t tell a lot about Phuket – I have just seen the beach close to the hostel where I was staying. The beach is not as beautiful as other beaches in Thailand (as everybody can see on the internet).

The Phuket province consists of the country´s largest island and 32 more islands and it is the gate away to reach some of the most famous islands of Thailand as Koh Phi Phi Island known for being the filming location of the movie “The Beach”, Koh Samui, Koh Lanta, Koh Phangan known for the Full Moon Party, Koh Tao.