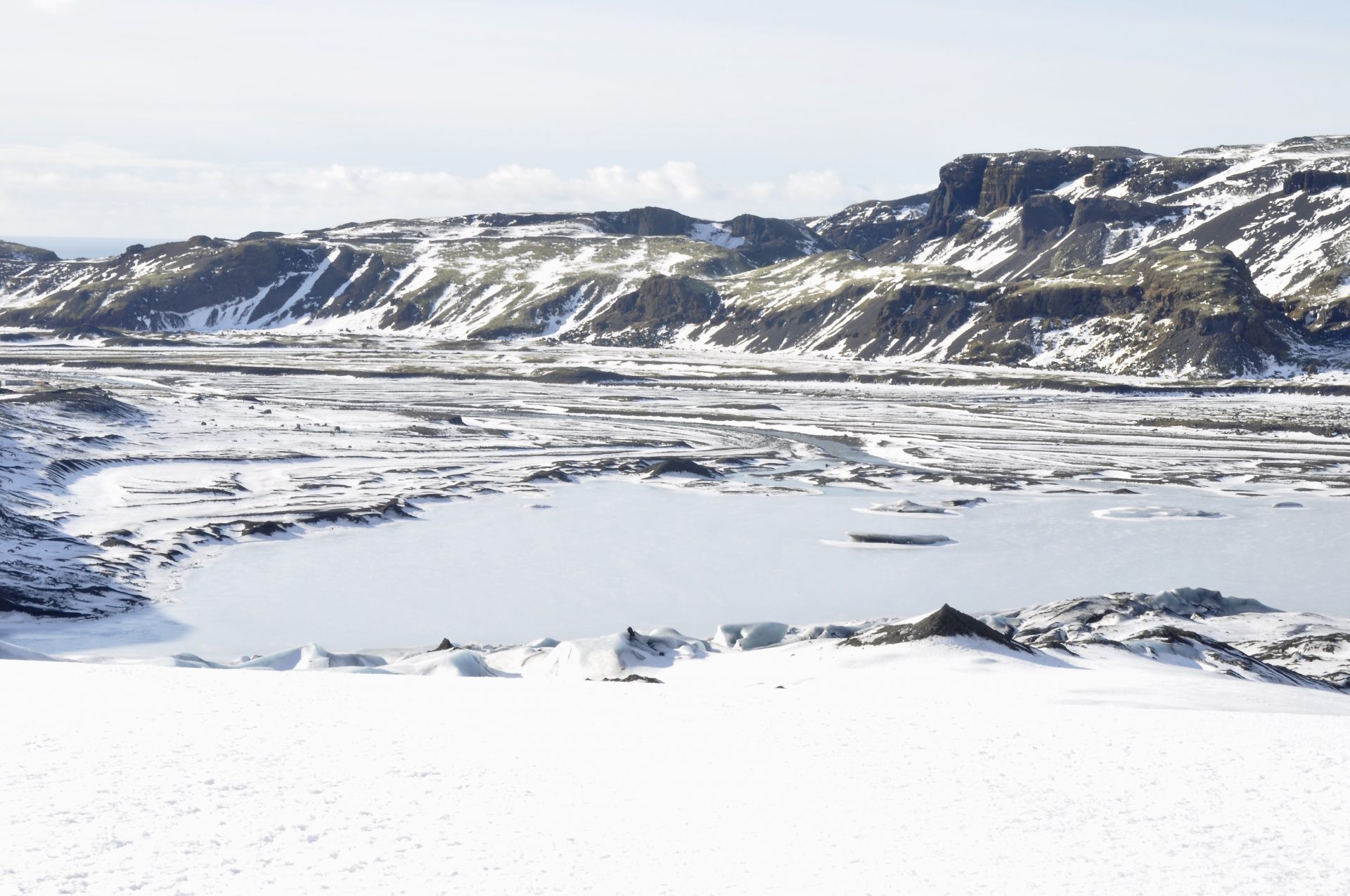 The main reason I´ve visited Iceland is the Aurora Borealis. Since we had just 5 days and that it was winter (and we are not used to their winter) I decided to book everything from Milan. Please be aware that Iceland is an expensive country therefore a 5 days’ trip will not be cheap at all. The first thing I have booked was the Aurora Borealis Tour/Hunt. I remember to have spent a lot of time looking on the internet or reading on the Lonely Planet to figure out which one in my opinion was the best. At the end, I have chosen the one which guaranteed me to be able to be rescheduled on the next available tour in case the tour was cancelled. This was a clever idea because our tours were cancelled till the last day of our trip and we were lucky enough to be able to see the fantastic Aurora Borealis.

Also known as “The Land of Fire and Ice” Iceland was formed about 25 million years ago. It is home  to some of the largest glaciers in Europe (including Europe’s largest, Vatnajökull) & some of the world’s most active volcanoes. A part from that Iceland is also known for gorgeous waterfalls, deep fjords, black sand beaches, geysers. In Iceland you can experience extremely long summer days with near 24-hours of sunshine & extremely short winter days with only a few hours of daylight.

Iceland is located near the Arctic Circle & with its 500km east to west & 300km north to south it is the second largest island in Europe.

The Blue Lagoon (which contains 9 million liters of water and it is self-cleansing every 40 hours) is a short drive from the airport therefore it was our first stop. The geothermal water originates 2,000 metres below the surface, where freshwater and seawater combine at extreme temperatures. It is then harnessed via drilling holes at a nearby geothermal power plant, Svartsengi, to create electricity and hot water for nearby communities. On its way to the surface, the water picks up silica (which makes it look blue by the way it reflects sunlight) and minerals. During summer the algae which multiplies when exposed to direct sun can make it look green. Please be aware that the colour is white and that the colour is made from the sun. When the water emerges, its temperature is generally between 37°C and 40°C.

But what is exactly the Aurora Borealis?

An aurora borealis or polar lights, northern lights or southern lights (aurora Australis), is a natural light display in the Earth’s sky, predominantly seen in the Northern countries (around the Arctic and Antarctic).

Auroras are produced when the magnetosphere is sufficiently disturbed by the solar wind that the trajectories of charged particles in both solar wind and magnetosphere plasma, mainly in the form of electrons and protons, precipitate them into the upper atmosphere (thermosphere/exosphere) due to Earth’s magnetic field, where their energy is lost.

The resulting ionization and excitation of atmospheric constituents emits light. The form of the aurora, occurring within bands around both polar regions, is also dependent on the amount of acceleration imparted to the precipitating particles. Precipitating protons generally produce optical emissions as incident hydrogen atoms after gaining electrons from the atmosphere. Proton auroras are usually observed at lower latitudes.

Please be aware that this Is a natural phenomenon and therefore it is unpredictable. There are various colors which can be seen. The green one is the most common and therefore the easiest one to see.

We did see the green color and I can assure you that it is something amazing. We did stop the bus in a parking area – turned all the lights off and after a soft begin the light started to get more and more vivid. Spectacular!

How to capture it on camera?

Now I would like to give you some hints on how to capture this beautiful moment on camera.

First, you need a tripod and a Camera with Manual Mode Functionality (without it is impossible to get a vivid imagine)

Start with an Iso of 400-800 and make some shots. If the photo isn’t bright enough, continue to increase your ISO until it is.

If you go on a tour, ask your tour guide who is used to making these kinds of photos and can help you with your camera settings

Another highlight was the whale watching which unfortunately did not go the way I expected. We´ve seen a pod of white-beaked dolphins (it turned out to be two pods close together, 10 individuals in one and 5 individuals in the other) travelling very slowly & it looked like they were mating. We managed to see some birds on the bay such as little auk, razorbill, European shags, northern fulmar, blur fulmars, glaucous gull, Iceland gulls, kittiwakes,  eider duck, northern gannets & common guillemot. To be honest with you I was a bit disappointed not having seen whales, but as said already before nature is unpredictable and this is the reason why it is so impressive and beautiful!

If you are asking yourself if we were cold, I can assure you that all the tour companies have their warm floatable overalls or raincoats you can put on your cloth. I do suggest buying hand heather, feet heather etc. which you can buy f.e. at Decathlon and which help you a lot if you are always cold as I am. So please do not give up on making such trips just because it is cold because it would be a pity to miss out on such great experiences.

Iceland is also known for its glaciers therefore I could not avoid booking a glacier walk. Please be aware that it is not as easy as it could seem therefore do it with a guide. One of the easiest glacial tongues to reach is Sólheimajökull. The glacier tongue is a glacier falling from the Mýrdalsjökull glacier at a very slow pace.

Tours provide you with all the equipment needed and give you all instructions to have a lovely & safe walk. Experienced instructors gave us the basics of climbing, crampon usage, and safety. After having given us the right sized crampons & ice-axe we were divided in smaller groups.

In the first part (the way that leads to the actual glacier) you can walk by yourself. As soon as you start climbing on the glacier the guide tells you to walk one behind the other. Being surrounded by gorgeous natural wonders like cracks, holes, ice-ravines, and ice caves (that are formed by small icebergs falling from the glacier, breaking down away from it and melting into the lake below) makes this experience special.

Some other sights along the way

Beside the glacier walk our tour stopped in some other gorgeous places such as Skógafoss waterfalls & Seljalandsfoss waterfalls (short excursus the word “foss” in Islandic means waterfall).

Skógafoss is a huge waterfall (drop of around 60 meters and width of around 25 meters) – it is really interesting the fact that you can see the waterfall from the bottom and from the top. There is a stairway (takes around 10min) that leads you to the top of it (if you get there on a windy day as it happened to us you can feel the wind moving you step by step. I have read that due to the amount of spray the waterfall consistently produces rainbows are seen during sunny day but we were not that lucky having a grey sky. Close by there is the Skógar Museum but we did not have enough time to visit it.

Seljalandsfoss (drop of around 60 meters) is another gorgeous waterfall. There is a path that leads you behind the waterfall which unfortunately is closed during wintertime therefore we did not not have the chance to do it.

Iceland is also known for its black sandy beaches originated from the basalt lava. Volcanoes erupt regularly augmenting the black sand beaches. A famous one is Vík í Mýrdal. 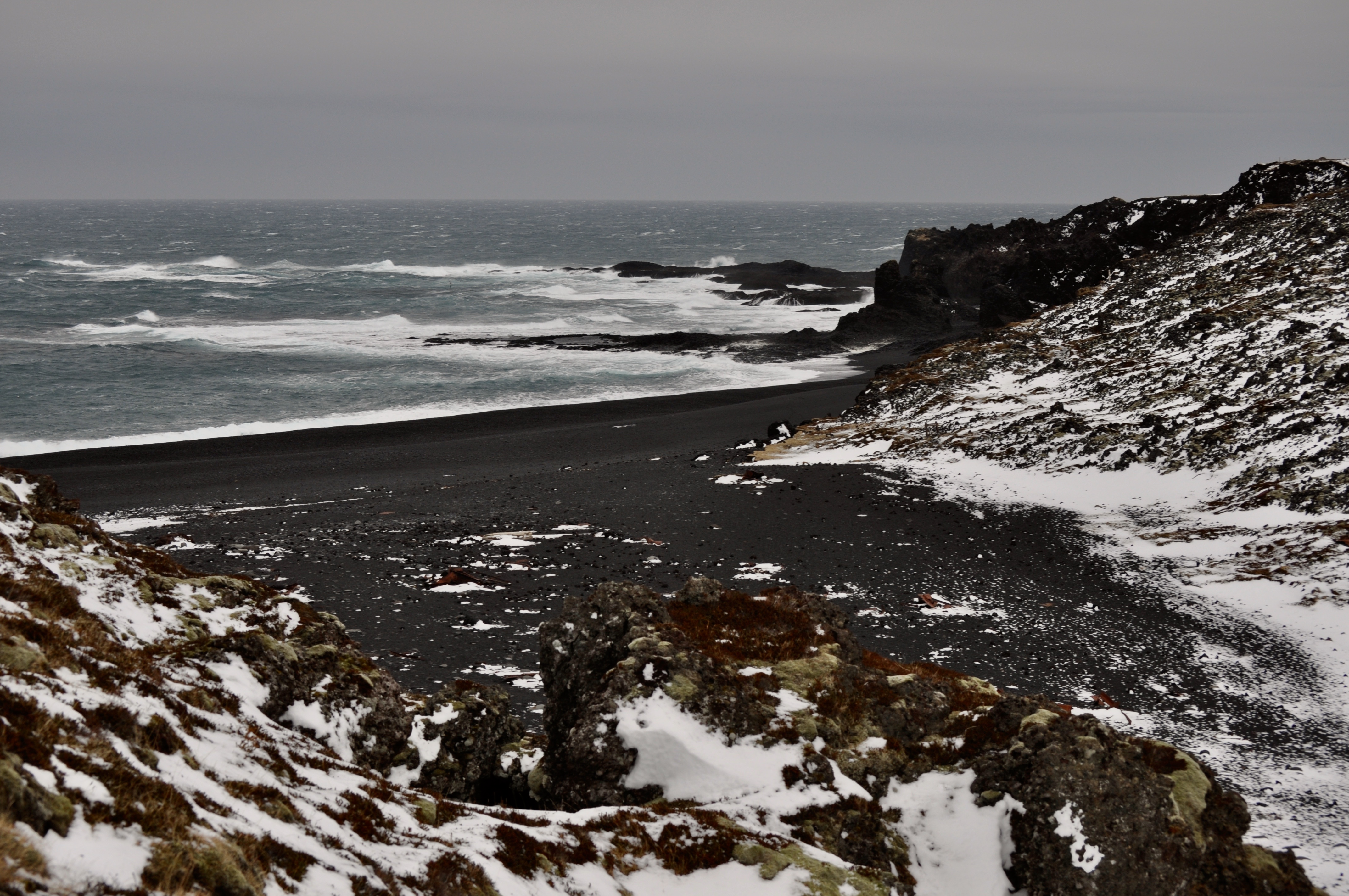 Seltjörn (Seal Pond) couldn’t have a better name because we did manage to see some seals. There was a puppy who was swimming close to the beach giving me the chance to get some nice shots even though I did not have all the photograph equipment with me. 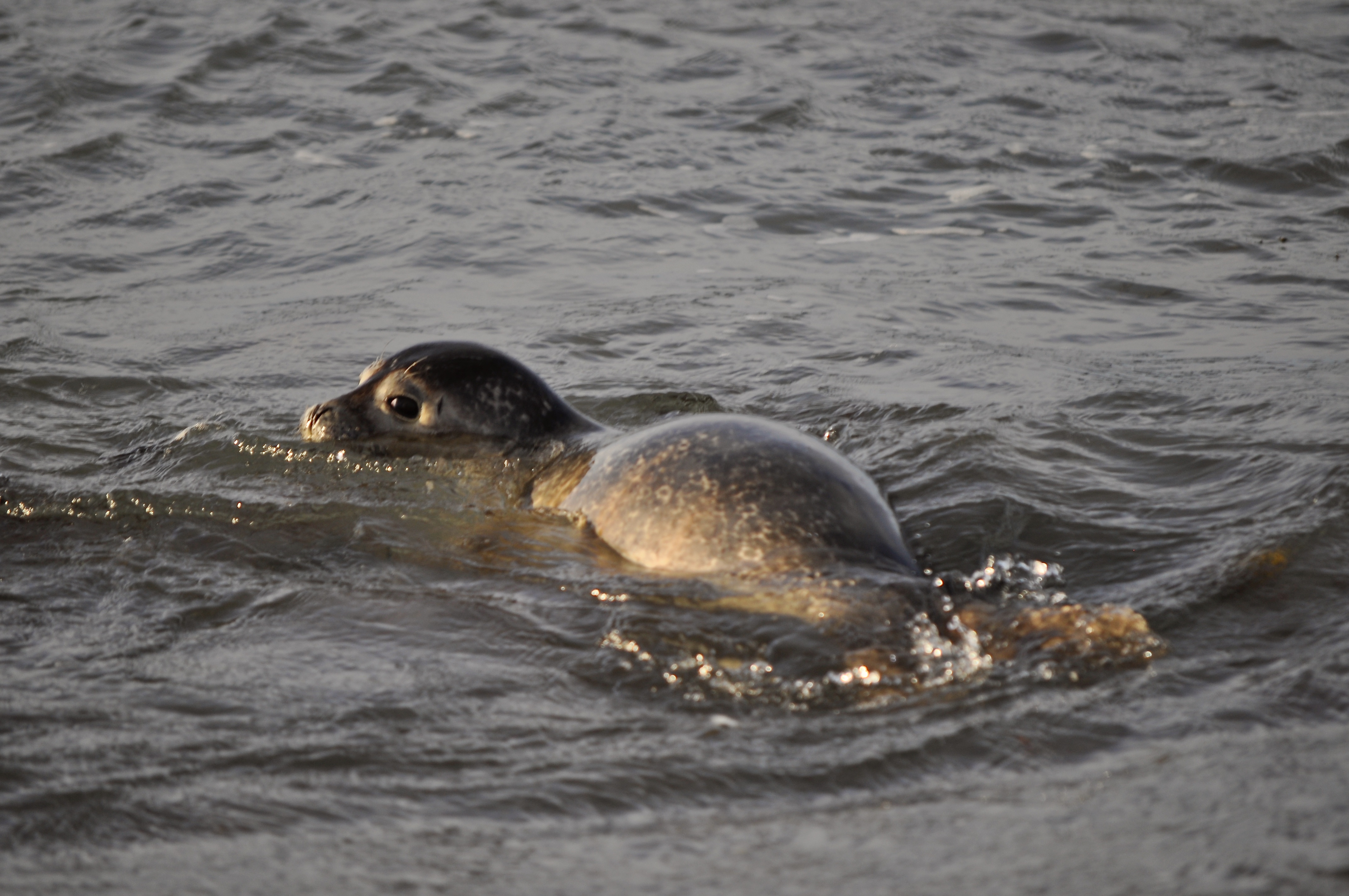 Snaefellnes is also known for Iceland´s only mass murderer Axlar -Björn (Björn Pétursson was his real name) who rented out rooms in his house. After killing people, he took them everything. One day he tried to kill two siblings but one of them managed to escape and alerted the authorities. He admitted killing 9 people, but authorities think he killed at least 18. He was executed in 1596.

The Golden Circle is known for the Geyser geothermal area, the waterfall Gullfoss and the UNESCO site (since 2004) Þingvellir National Park.

All geysers in the world have their names. The most impressive we have seen is Strokkur which shoots up a column of water up to 30 meters every 5-8minutes.

But what is a geyser? It is a spring characterized by intermittent discharge of water ejected turbulently and accompanied by steam. Its formation is due to particular hydrogeological conditions that exist only in a few places on Earth. The geyser effect is due to the proximity of magma therefore they are generally located in volcanic areas. The water works its way down until it meets rocks heated by magma (average depth of around 2,000 meters). The geothermally heated water starts boiling and the resulting froth of expanding steam and hot water then sprays out of the geyser vent. (a hydrothermal explosion). Eventually the water remaining in the geyser cools back and the eruption ends. 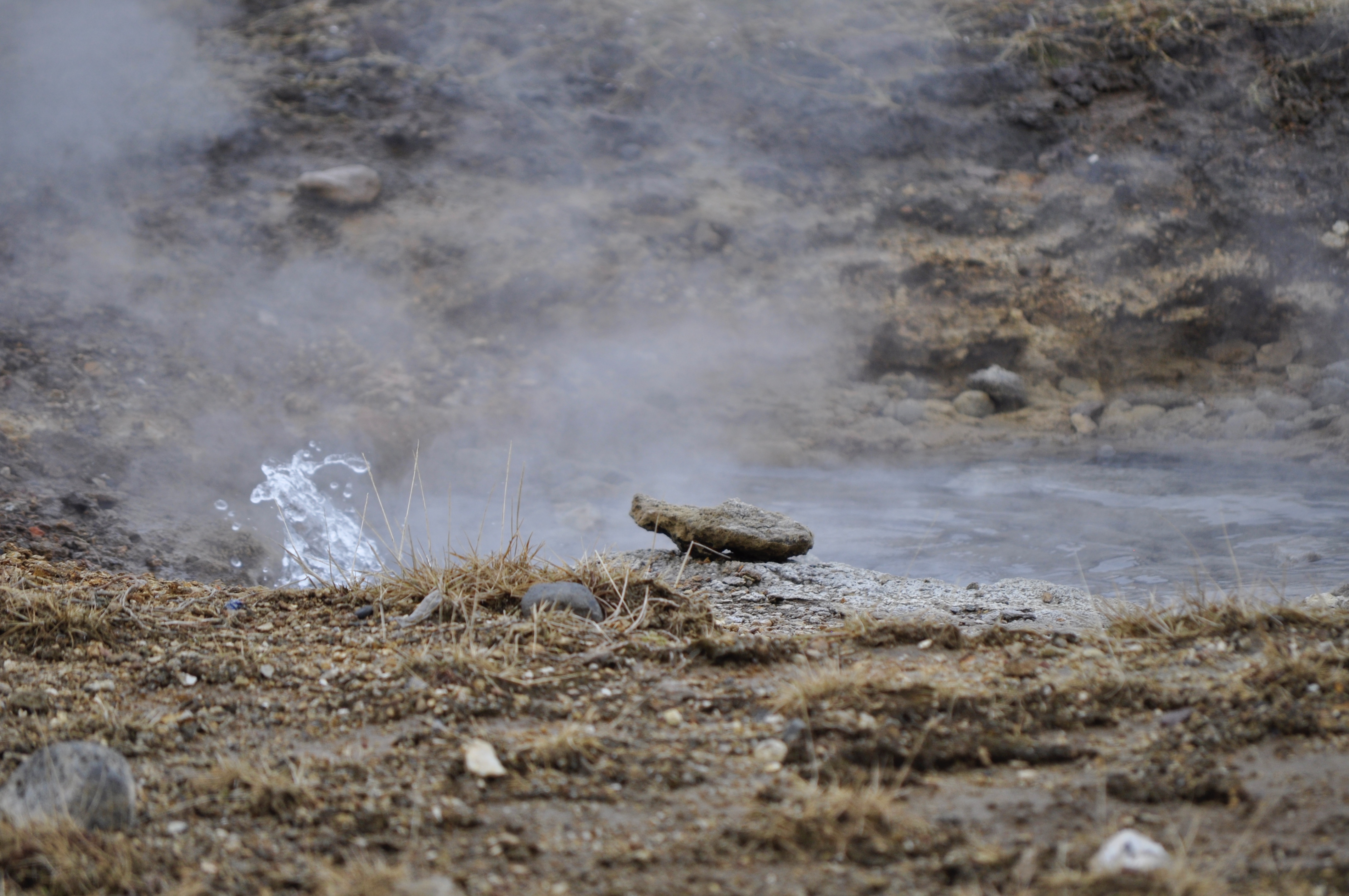 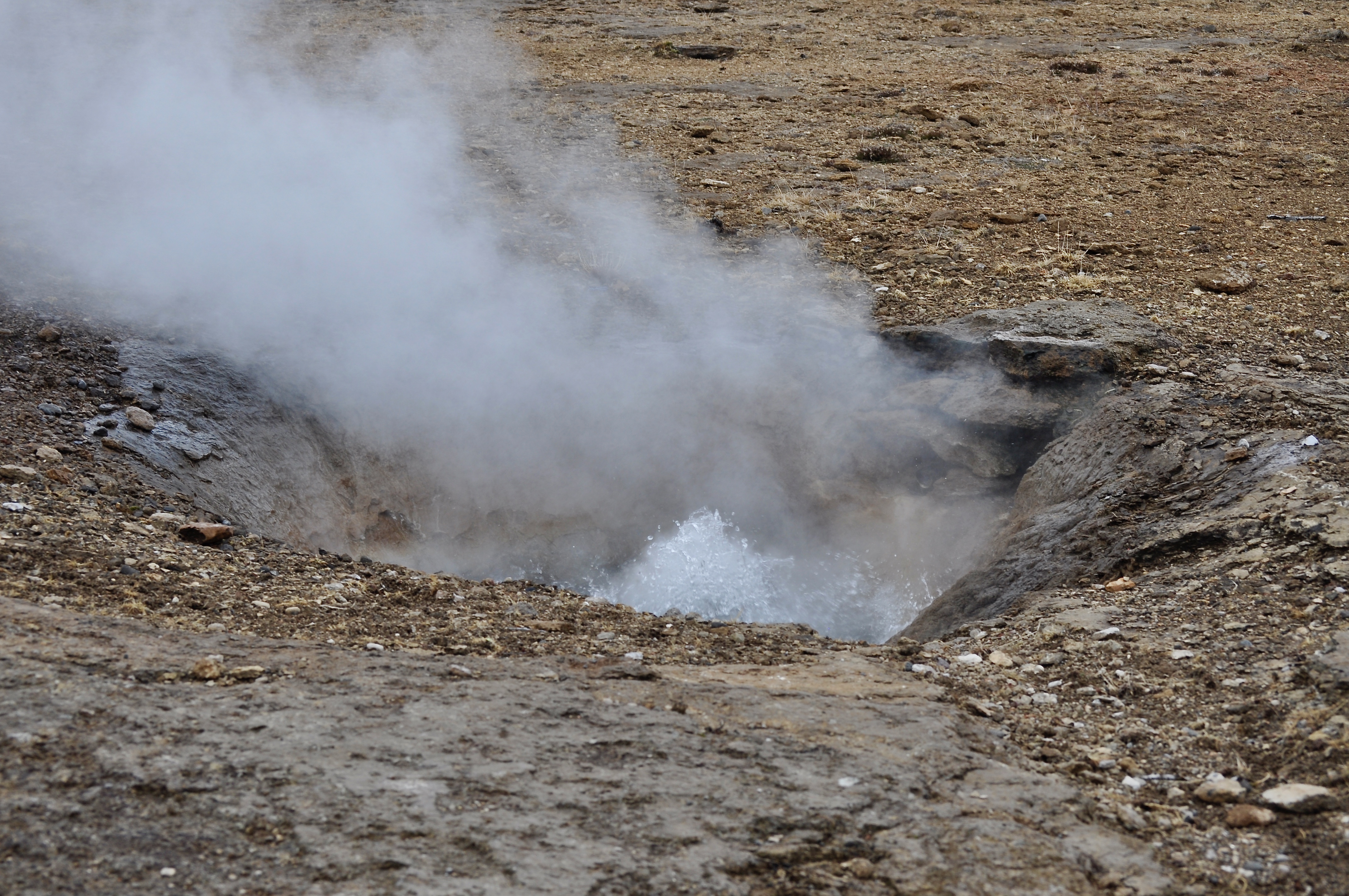 The gullfoss waterfall is a three-step waterfall and is part of the glacial river Hvitá and falls into a 62 meters’ deep canyon.

Þingvellir was founded in 1930 and it is a site of historical, cultural, and geological significance. Iceland is divided by the Mid-Atlantic Rift. Þingvellir lies in a rift valley (it is the only place in the world where the rift is above sea – level) that marks the crest of the Mid-Atlantic Ridge and the boundary between the North American tectonic plate and the Eurasian. To its south lies Þingvallavatn, the largest natural lake in Iceland. It is also associated with the Althing, the national parliament of Iceland, which was established at the site in 930 AD. Sessions were held at the location until 1798.

Another stop was the Fontana Wellness also known as Laugarvatn Fontana. The visit started with the geothermal bakery (the Icelandic way of making pot-baked lava bread). It was interesting to see how they dig out a pot of fresh bread from the hot black sand and to taste it served hot from the ground with some butter. While we were waiting for them to dig it out they explained us that after having prepared the dough, it gets placed into a pot, wrapped in plastic foil and then buried in the ground for 24 hours where it gets baked from the natural heat of volcanic hot springs.

There are different mineral baths that differ in depth, size and temperature. Some of them are located on higher spots and therefore they give you a panoramic view of the surroundings. There is a Finnish- style sauna. The Wellness is close to a lake where you can have a cold probably the most appropriate world is freezing dip. I managed to do that and for all the people who know me and do not believe my words I did a selfie. My dip lasted I guess 2 seconds and then I run in the hot steam rooms. Even though cold bathing is believed to have beneficial effects such as improving blood circulation I am pretty sure I won´t do it again.