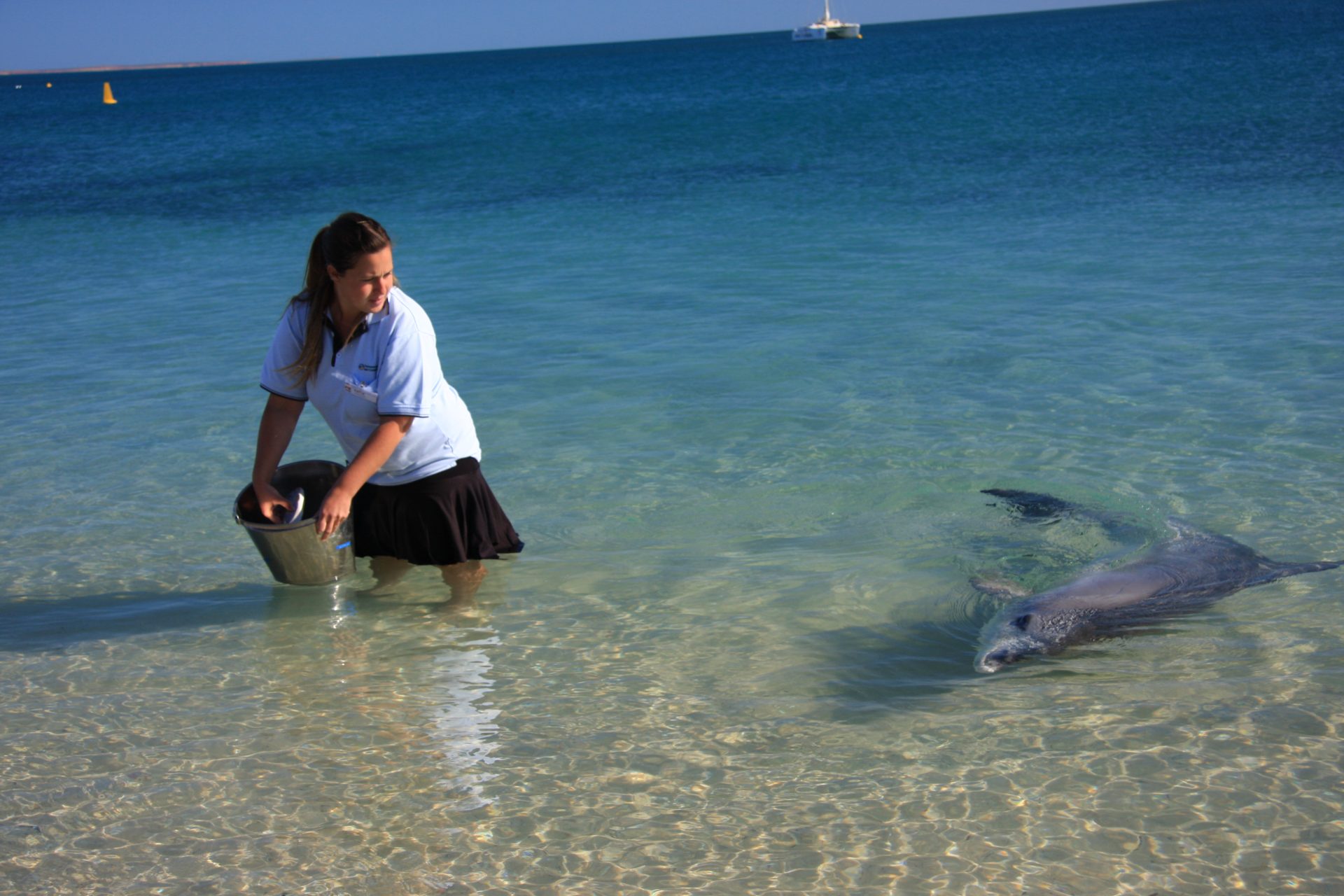 Monkey Mia Reserve is situated 860km north of Perth and is part of the Shark Bay World Heritage Area – the first location in Western Australia to receive UNESCO status in 1991.

Shark Bay – “Gutharragura” for the Aboriginal people means “Two Waters” because of the two protected bays. This gorgeous area is home of the Malgana Aboriginal people. To read more about this area please go to the article “Western Australia – a natural beauty”.

How to get there

To reach Monkey Mia you can either take a bus (Greyhound Buses) or a plane (Skywest Airlines). Please be aware that the only mobile service provider is Telstra.

Where does the name Monkey Mia come from?

I have my favorite one – now it´s your turn to pick yours.

Monkey Mia is renowned for the bottlenose interaction. Three generations of bottlenose dolphins (I was told the smallest bottlenose on earth) have been visiting the beach every day for 40 years. When I was in school I always wanted to work with dolphins therefore when I read about the possibility to volunteer and get close to these animals I applied immediately.

The volunteer program runs 365 days a year from 7:30am – 12pm – as a volunteer (of the Department of Environment and Conservation – DEC) you assist with the three feeds of the dolphins which are done each day between the hours of 8am and 12pm. Please be aware that to become a volunteer English language both spoken and written is essential. If you are younger than 18 years (between 16-18) you need a written approval from a guardian.

This volunteer program is very popular therefore the sooner you apply the more chances you have to find your spot.

Besides assisting with the feeds, the volunteer work might include the preparation of the fish for the dolphin, the cleaning/sanitizing of the fish room, site maintenance (sweeping floors, beach rubbish removal, window cleaning, gardening etc.), Walk Track Maintenance and visitor Surveys.

As a volunteer you are entitled to have a discount at the DEC shop (only if you are wearing the uniform) and at the backpacker accommodation at Monkey Mia. Monkey Mia Dolphin Resort has different types of accommodations – if a dorm does not suit you – you can choose a beachfront villa, a garden villa, a shared ensuite, a spot at the camping Area/Tent site or if you have a caravan with you, you can book a spot at the powered caravan site. As you can see there are plenty of options. The resort has a lot to offer such as BBQ areas, kitchen, bar/café, tennis court, pool & hot tub, a restaurant, internet access and laundries.

How everything started & the new guidelines

I think that it is interested to understand how everything started or at least it was for me. It can be dated back to the 1960s when fishermen use to share their catch with some dolphins. One of them was called Holeyfin who died after being pierced in the heart by a stingray barb in 1995. Over the years the numbers of dolphins that were fed at the jetty and later the beach increased. Researchers started studying the dolphins since 1984 – they discovered that the mortality rate among the calves of visiting dolphins was higher than of the other dolphins. Between 1987 and 1994 92% of calves born from these dolphins died due to the combination of overfeeding and spending too much time at the beach without caring for their calves.

Therefore, guidelines were introduced in order to raise these calves giving them the same chance of survival of the other wild dolphins. Of the 13 dolphins that come regularly they decided to feed only mature females (no males are fed) and to never give them more than 1/5 of their daily food (just local fish is given) requirements – this means that they must keep hunting. The feeding takes place only in the morning and there are no set feeding times to encourage dolphins to behave normally. Since these regulations we were told that 92% of calves survive. Please be aware that it is illegal to feed dolphins besides these authorized feds.

The interaction with the dolphins

Now let´s get to the part of the interaction with the dolphins which is done in the so called “Dolphin Interaction Area “. Obviously to protect the dolphins there are many things that are prohibited in this area such as boating, swimming, fishing, spearfishing, netting, water skiing and jet skiing . Please be aware that the dolphins are wild animals – therefore the interaction depends entirely on them.

The interaction takes place in the morning between 7:30am to 12pm. The feeding time starts 25minutes after the arrival of the first dolphin (these were the dolphins name when I was volunteering: Surprise, Puck, Piccolo, Shock) or 10minutes after the arrival of a mother dolphin with her calf (while I was volunteering there was Nicky who had a calf which was born on August the 27th – it was really important to start not later than 10minutes after her arrival because calves have to be fed every 15minutes – the water where the feeding takes place is too shallow therefore the calf is not able to eat for the entire duration of the interaction).

After an introduction about the dolphins and explanation on how to behave the rangers/volunteer do get in the water and get close to the dolphin they have been assigned to. 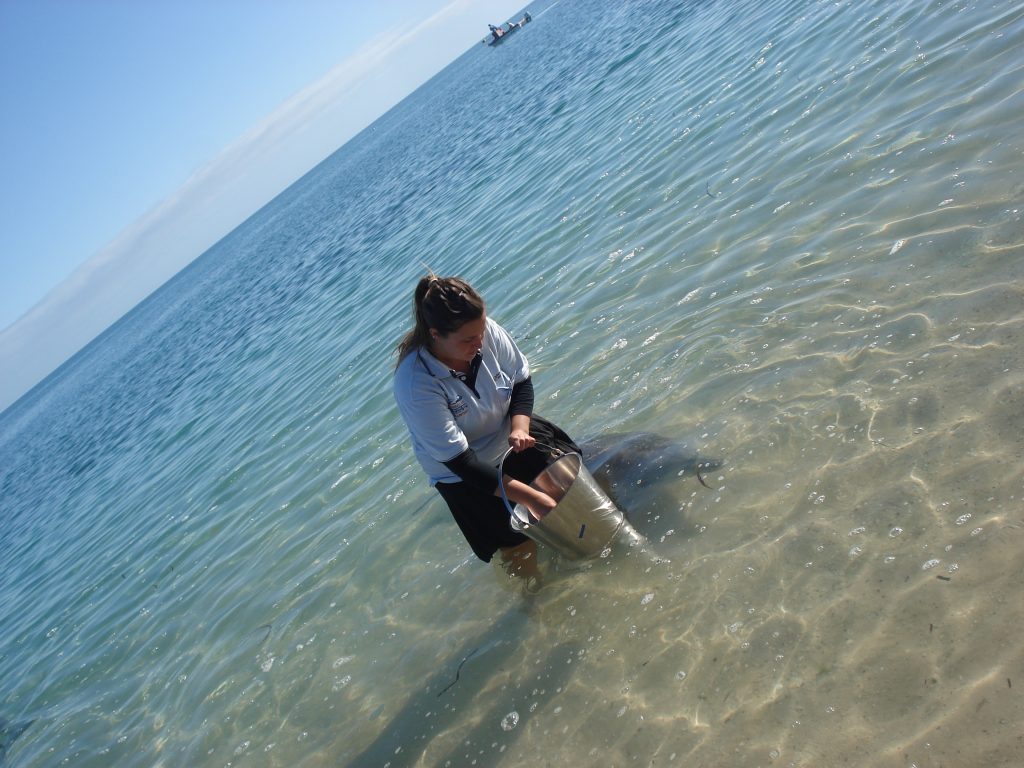 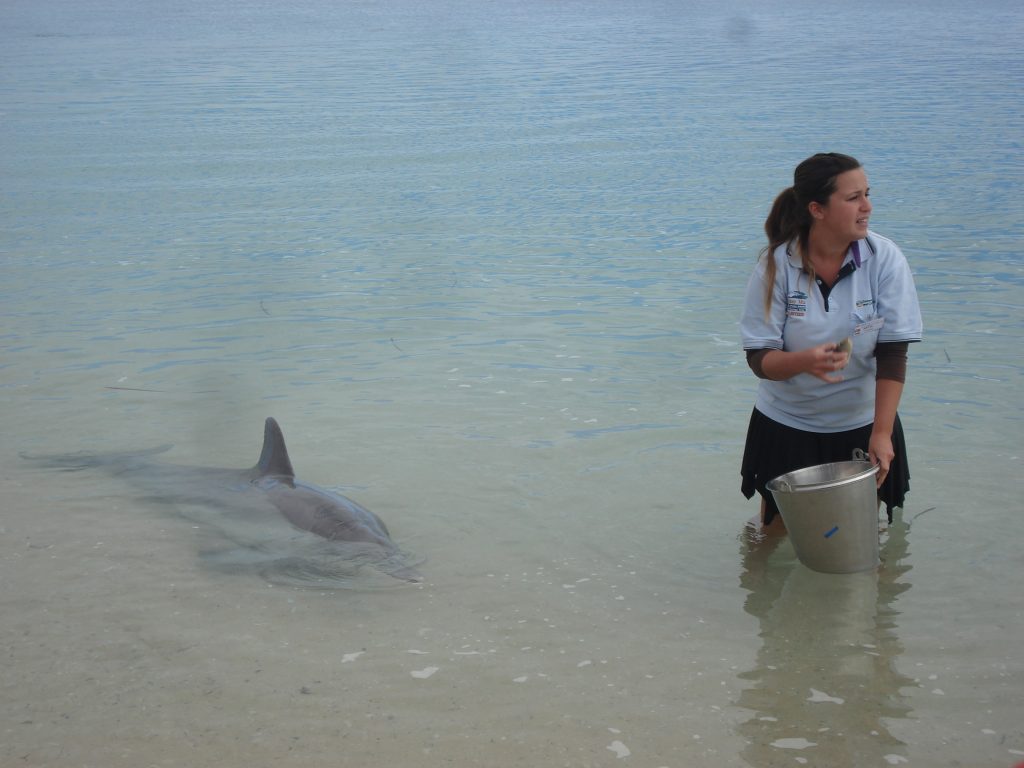 At this point every volunteer chooses one of the crowd to feed the dolphin. Please be aware that just the volunteers and the one chosen for the feeding can get into the water – everyone else must stay out of the water. This is because if the people are in the water they can create sounds which distract the dolphin’s mothers from the calf and because it gives dolphins conflicting signals.

Please be aware that the dolphins are fed under strict guidelines to ensure that dolphins continue to hunt and behave naturally:

When you get to the last fish all volunteers must raise their hands and wait for everyone else – the last fish will be given at the same time (this is done because every dolphin gets a different kind of fish and different amount of fish depending on their age and it is important to finish all together in order to avoid having dolphins swimming around to get the fish which is meant to be for another dolphin).

Below some info on how to feed the dolphin:

I remember that my favorite one was Puck that by the time I was there was 31 years old – the reason why is very simple. On my very first feeding Puck arrived late and to get my attention she rubbed on me – well this was my first interaction with dolphins…one that I never forget. Maybe now you are asking yourself how I can be sure that it was Puck and not another female well dolphins are recognized by the rangers thanks to their dorsal fins which change throughout the years becoming a distinctive feature of everyone.

During the dolphin feeding – Pelicans are fed as well. This is done to avoid that pelicans start coming after the fish (fish that while the preparation falls on the ground or fish without tale is given to pelicans). The Australian pelican is widespread on the inland and coastal waters of Australia, New Guinea, Fiji, and parts of Indonesia. I was told that it has the longest bill of any living birds. 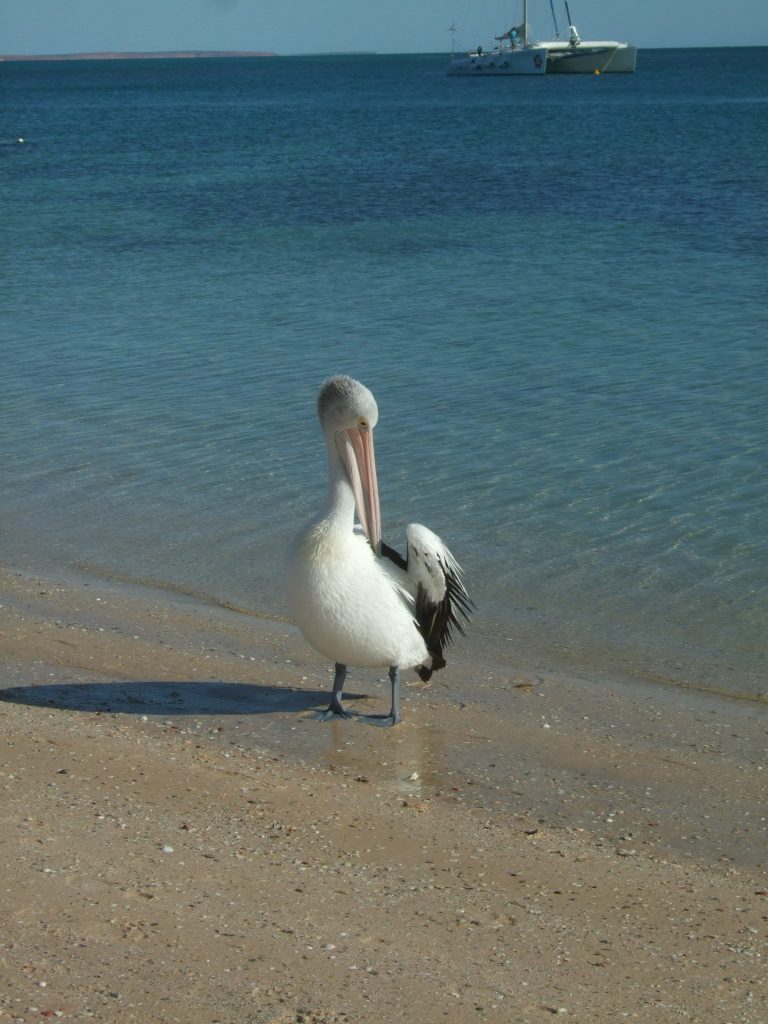 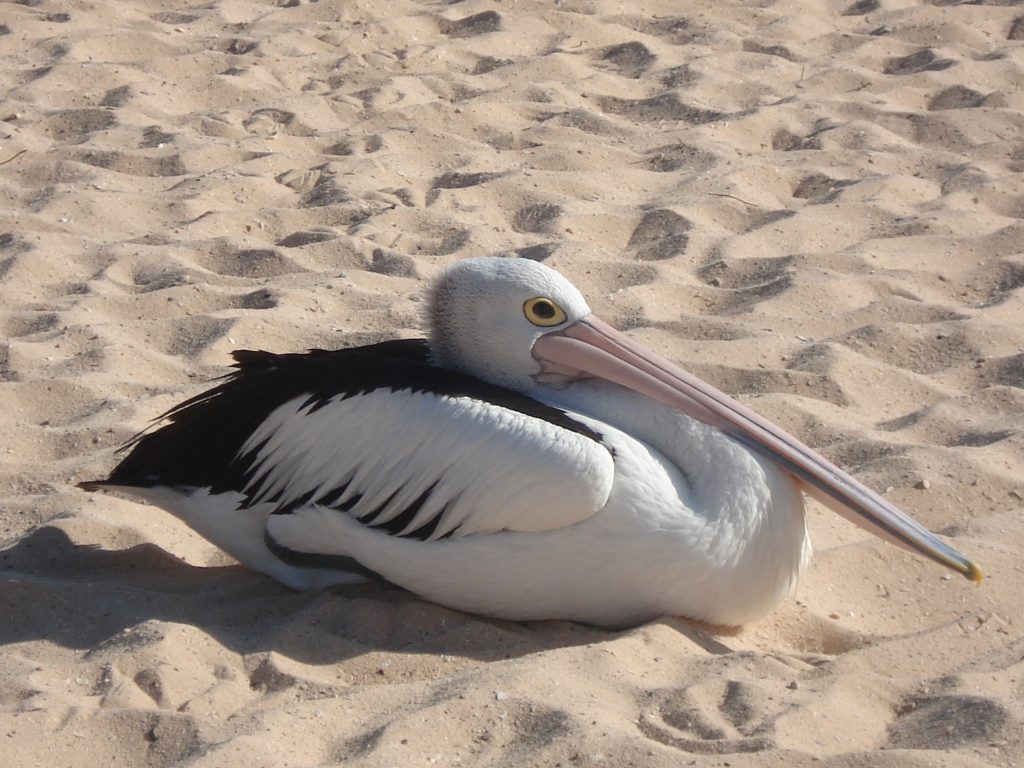 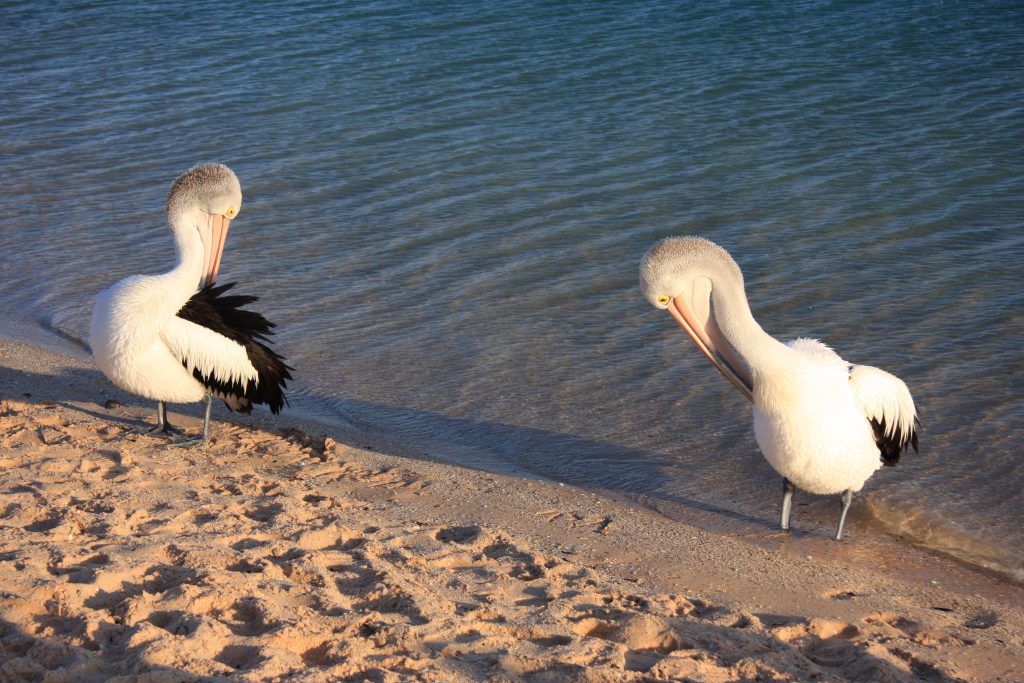 Now I would like to give you some facts about the Indo Pacific Bottlenose who live in Monkey Mia. 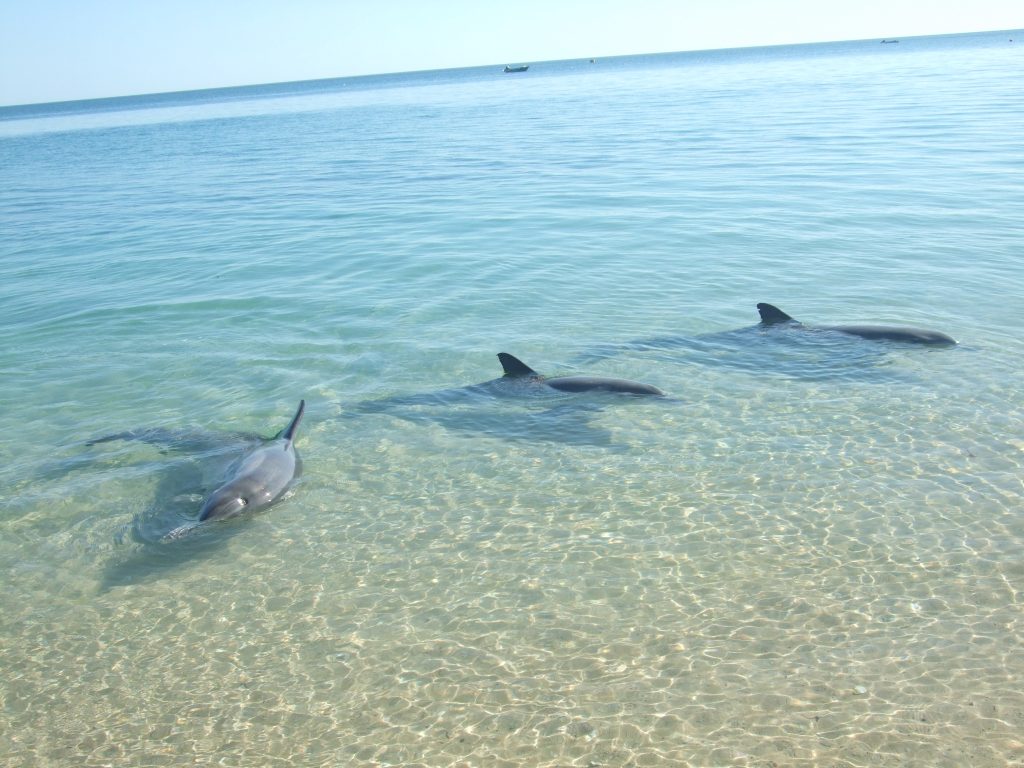 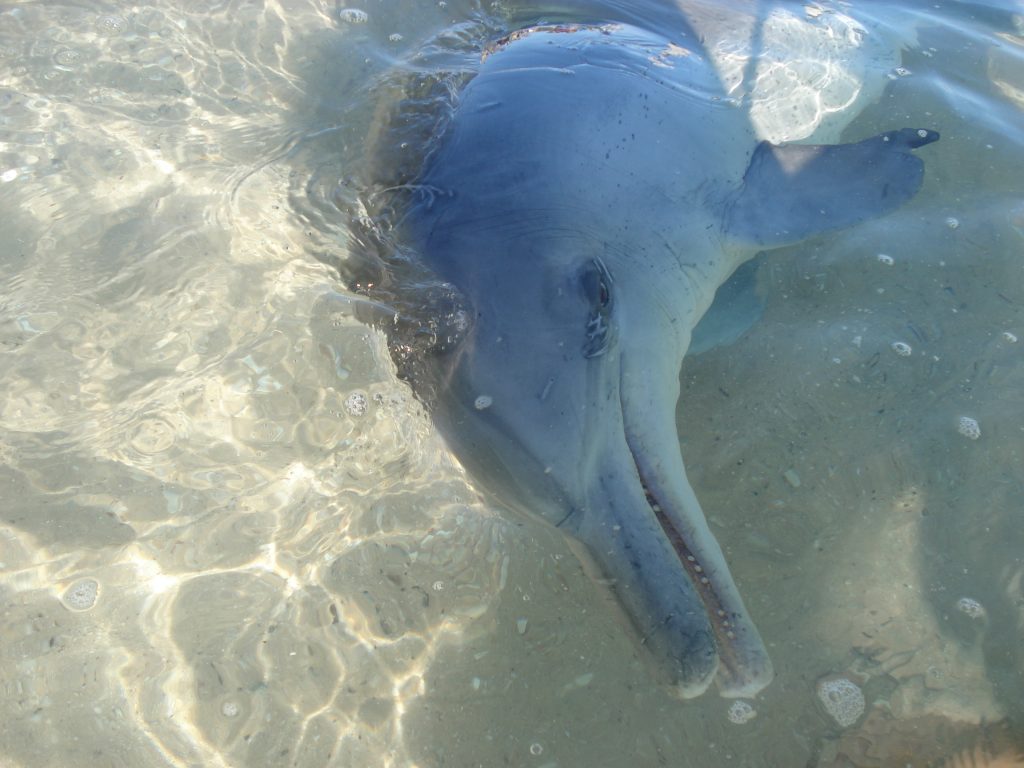 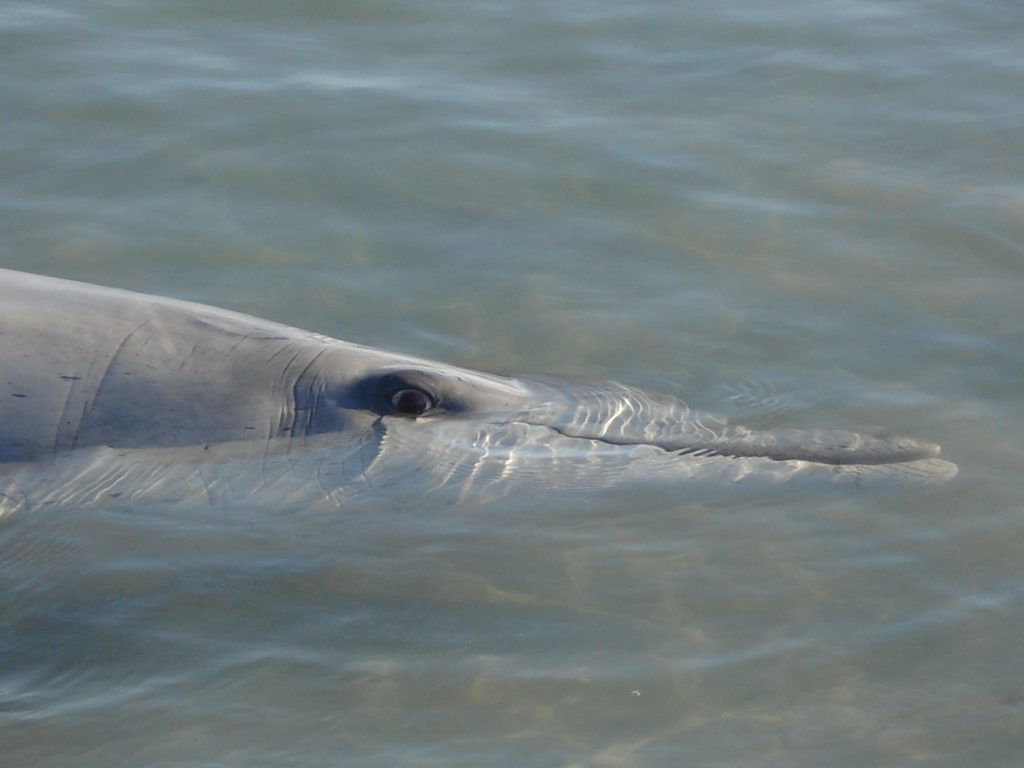 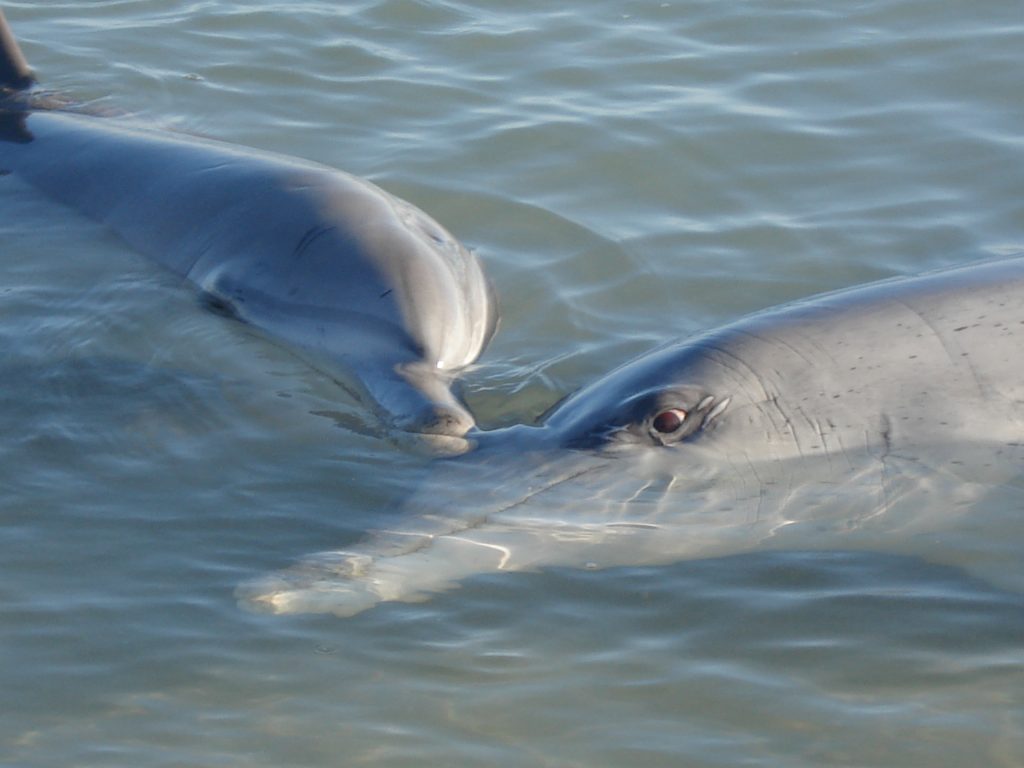 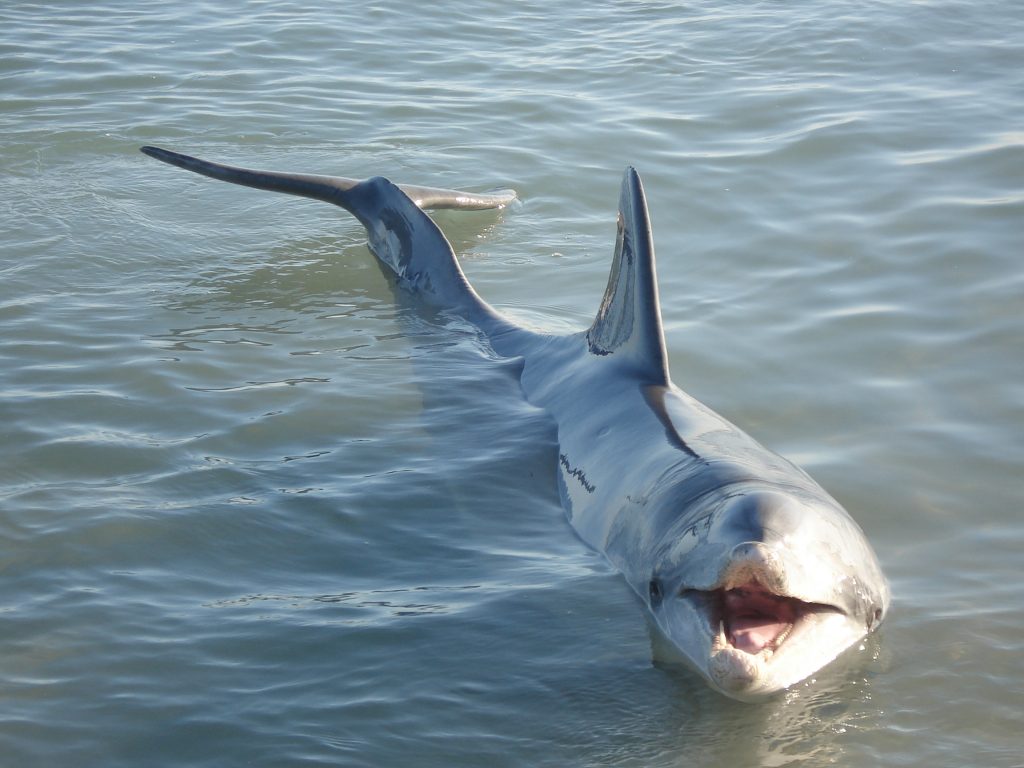 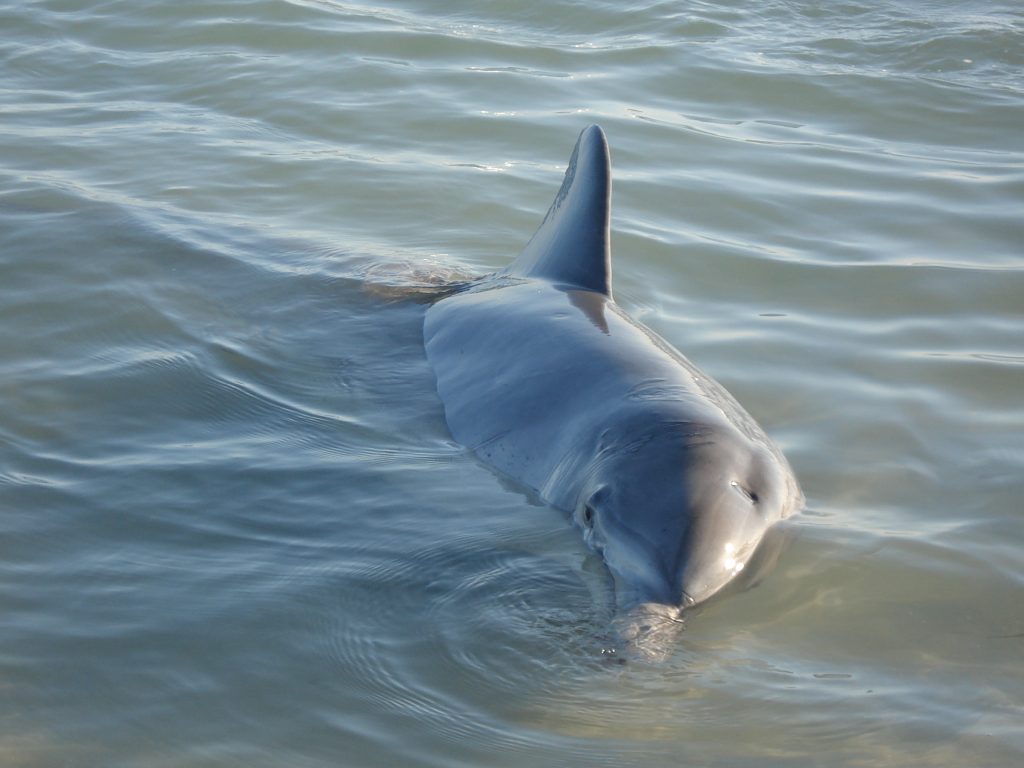 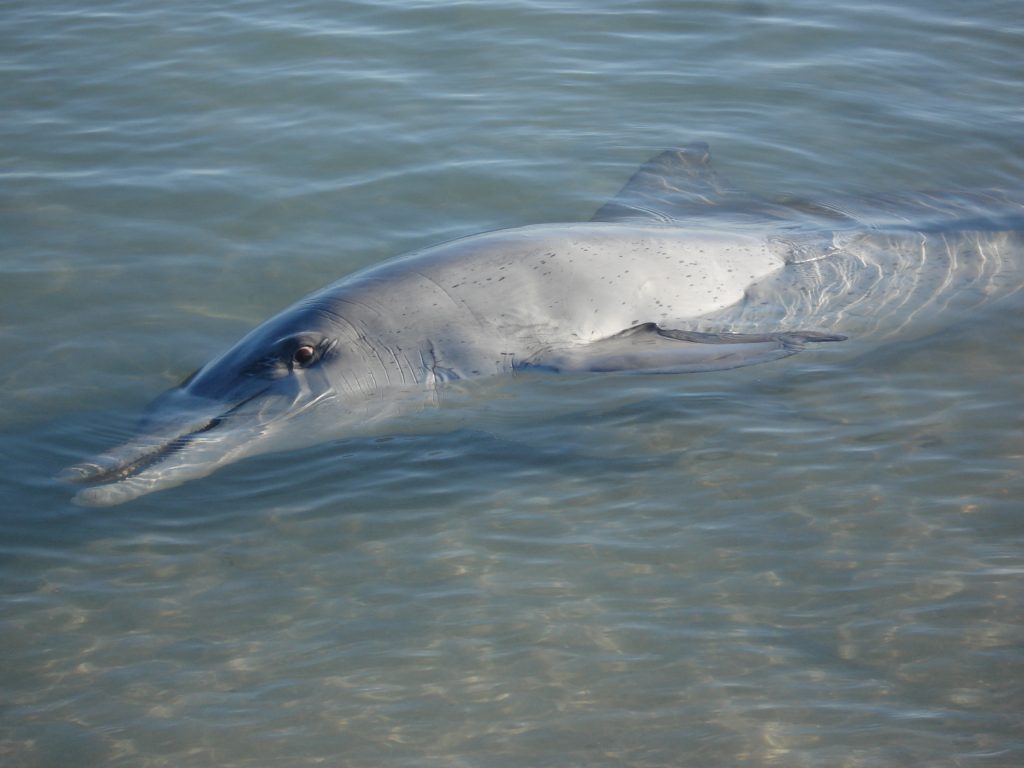 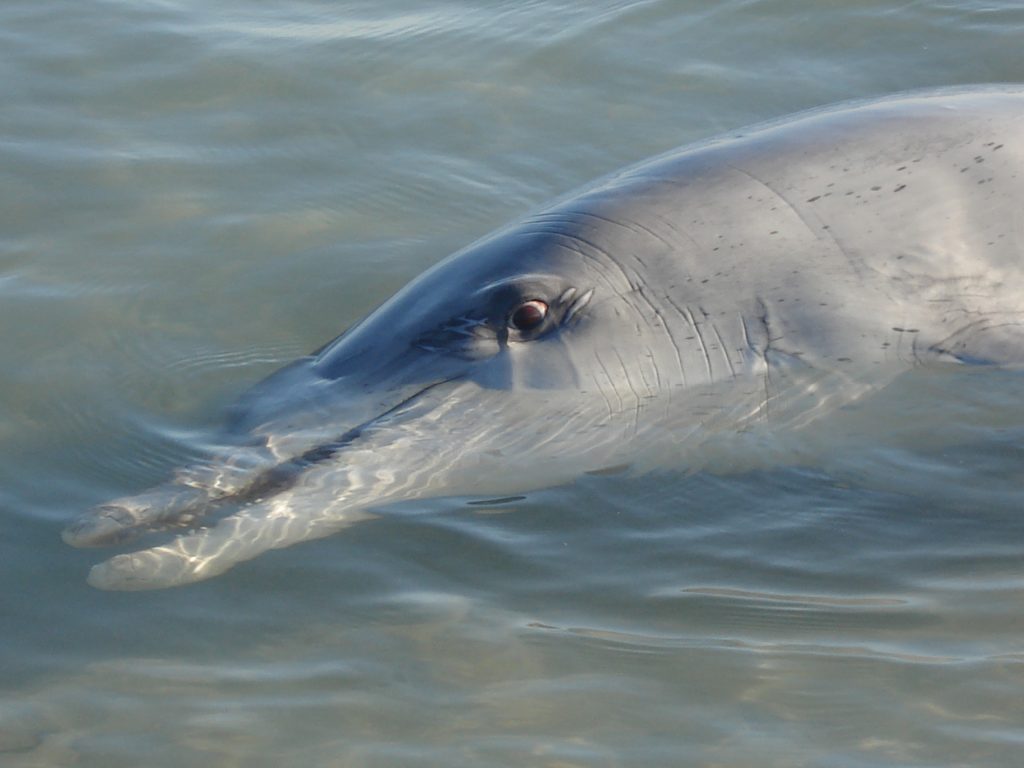 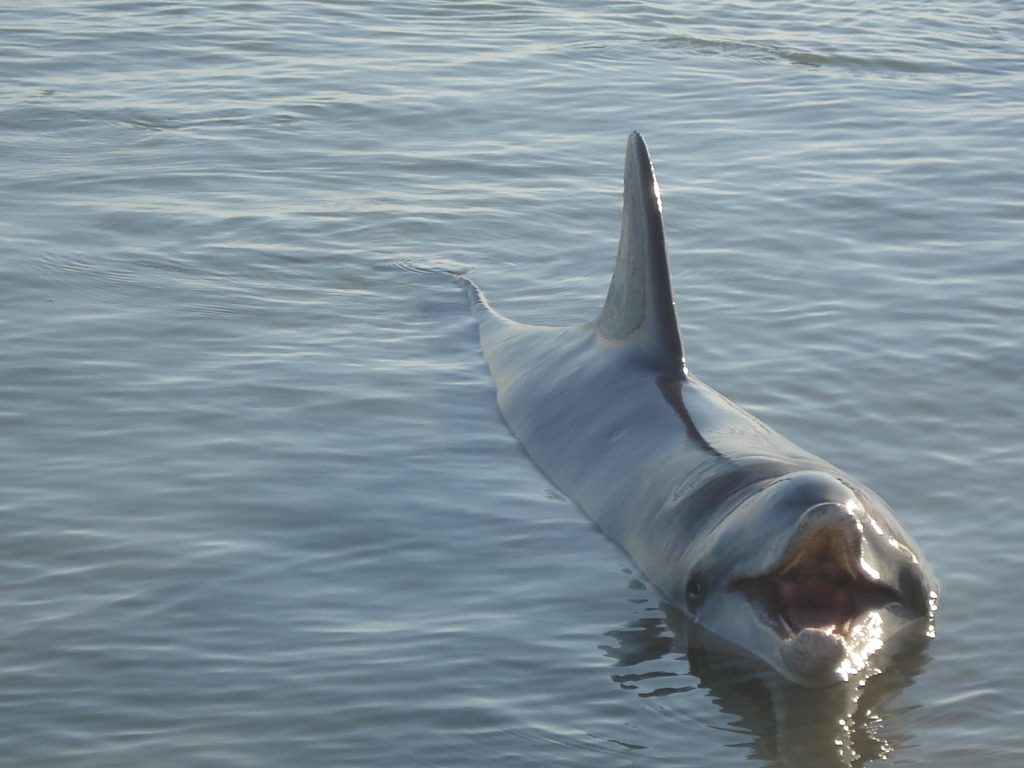 Shark Bay is also known for having a large population of dugongs (10% of the world´s total population) – as a volunteer I was entitled to a free wildlife cruise (after 4 days of volunteer work and subject to availability) and I was lucky enough to see these spectacular animals and much more. Below some info

I do suggest you take this boat tour because the guides do really have a lot of knowledge about the marine wildlife and you will definitely learn some interesting things and depending on the time of the year you may also see turtles, sharks, sea-snake, stingrays, and flying-fish. 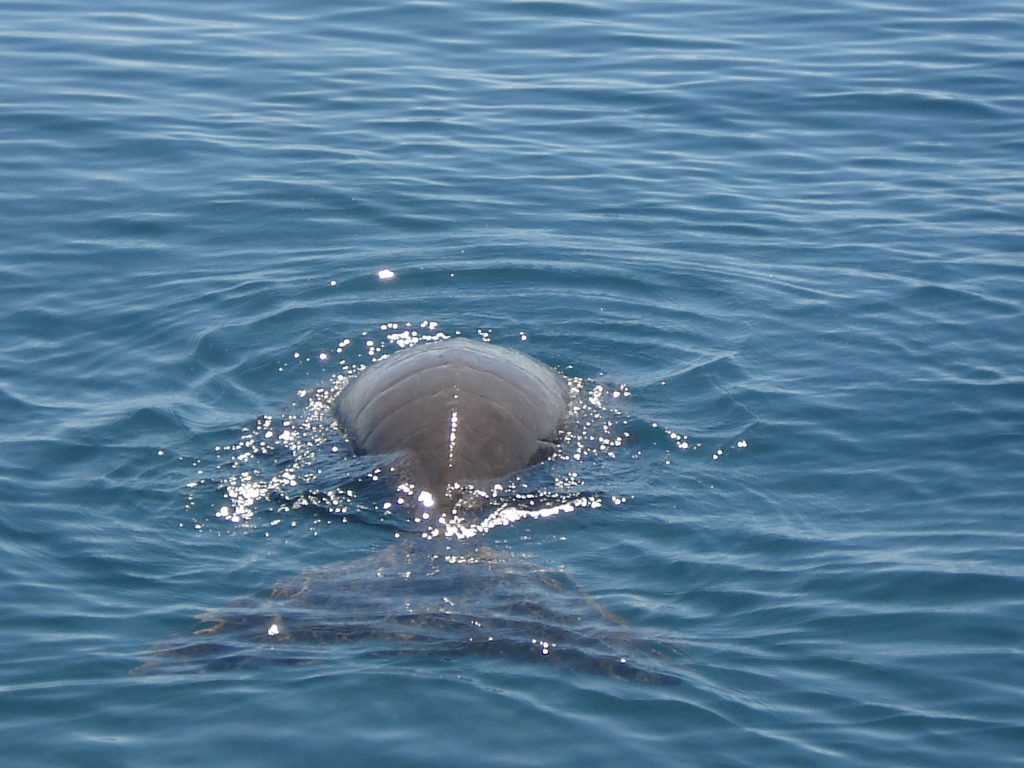 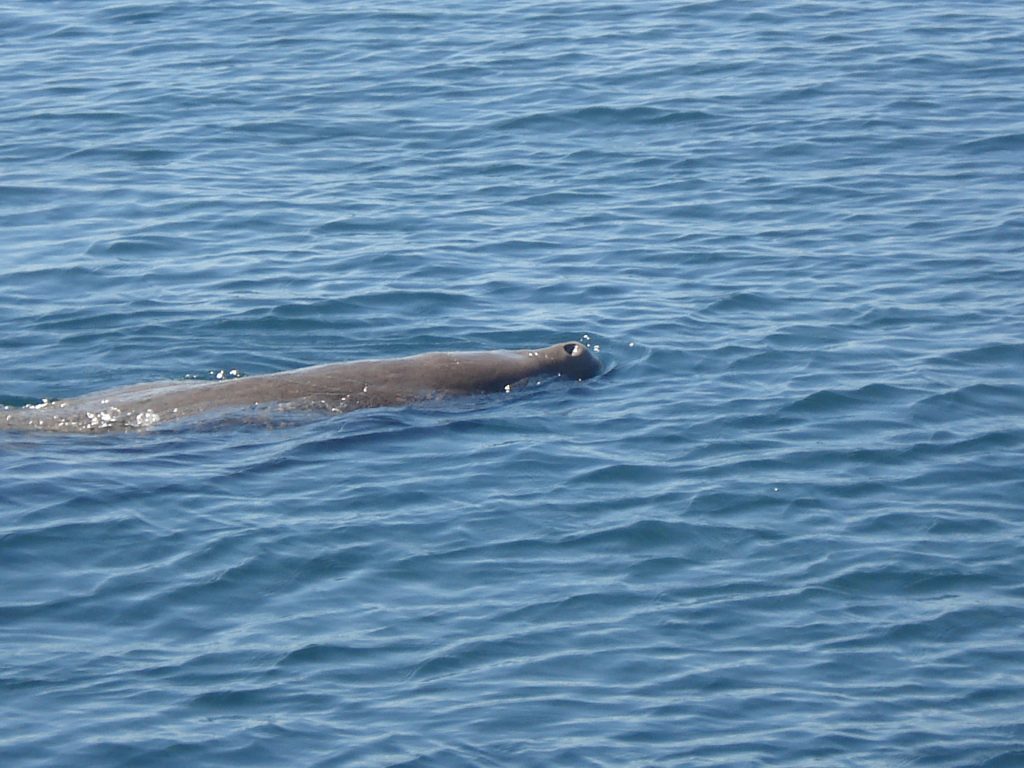 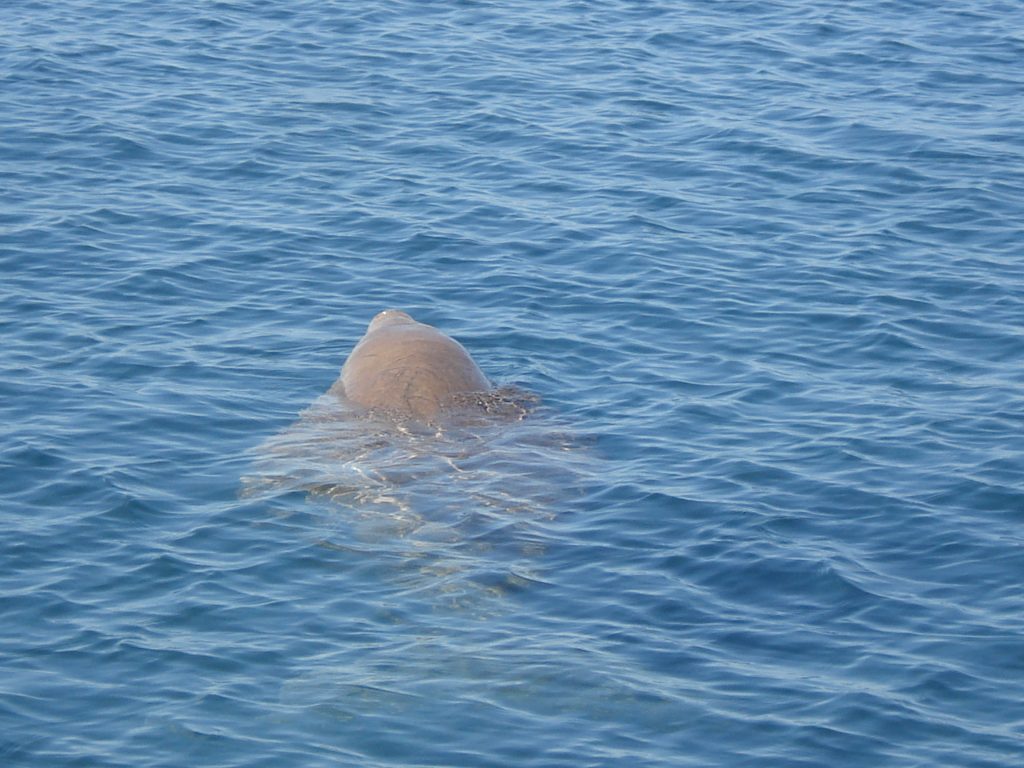 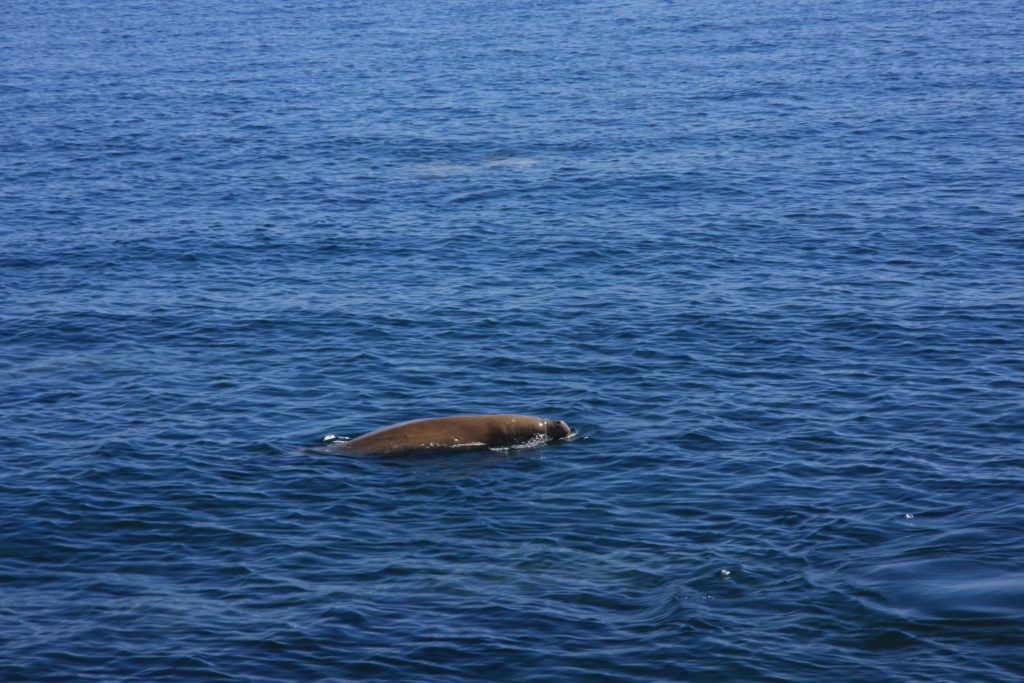 What else to do in Monkey Mia

Another lovely thing I did was the sunset cruise – highly recommended. All boat tours from Monkey Mia are subject to strict environmental regulations to ensure minimal impacts on marine animals.

I spent my afternoons in Monkey Mia relaxing, sunbathing and swimming. If you are lucky enough, you will see dolphins while swimming (I was)- please be aware that it is illegal to approach them within 30 meters . If you are fortunate to have a dolphin approach you please do not forget that we are not talking about pets – remain still and enjoy the experience without touching it. 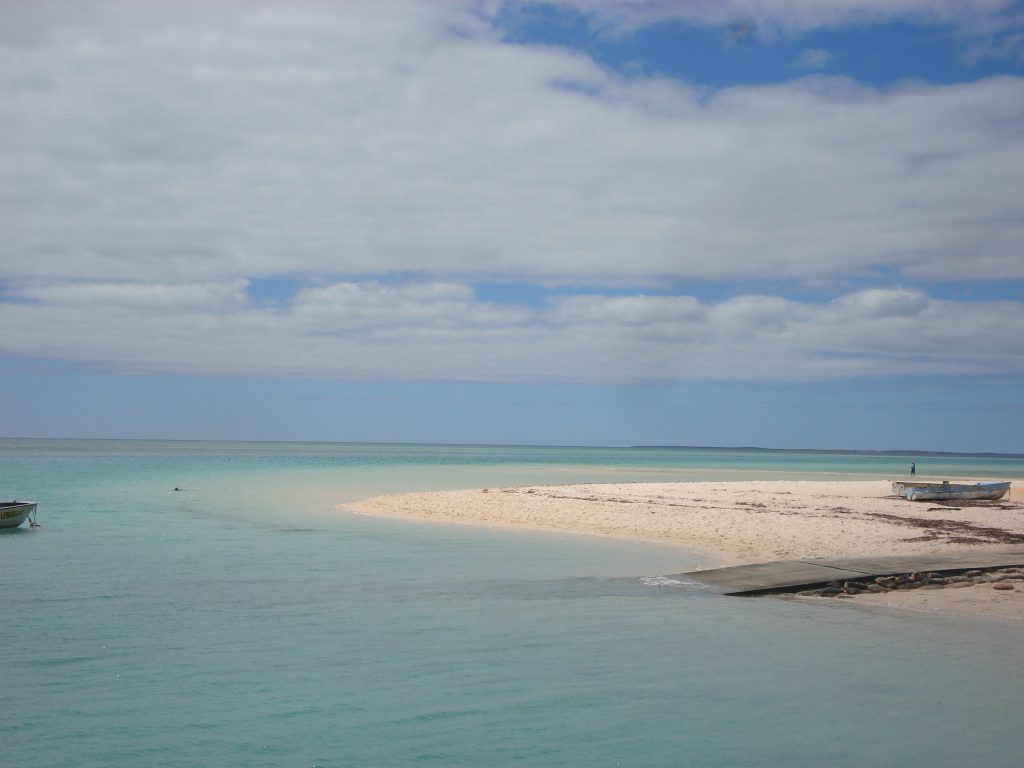 There are a lot of things to do in this area – if you have a car I do suggest you spend the time visiting also the area around – as said before to have some info’s regarding the area please read the article “Western Australia – a natural beauty”.