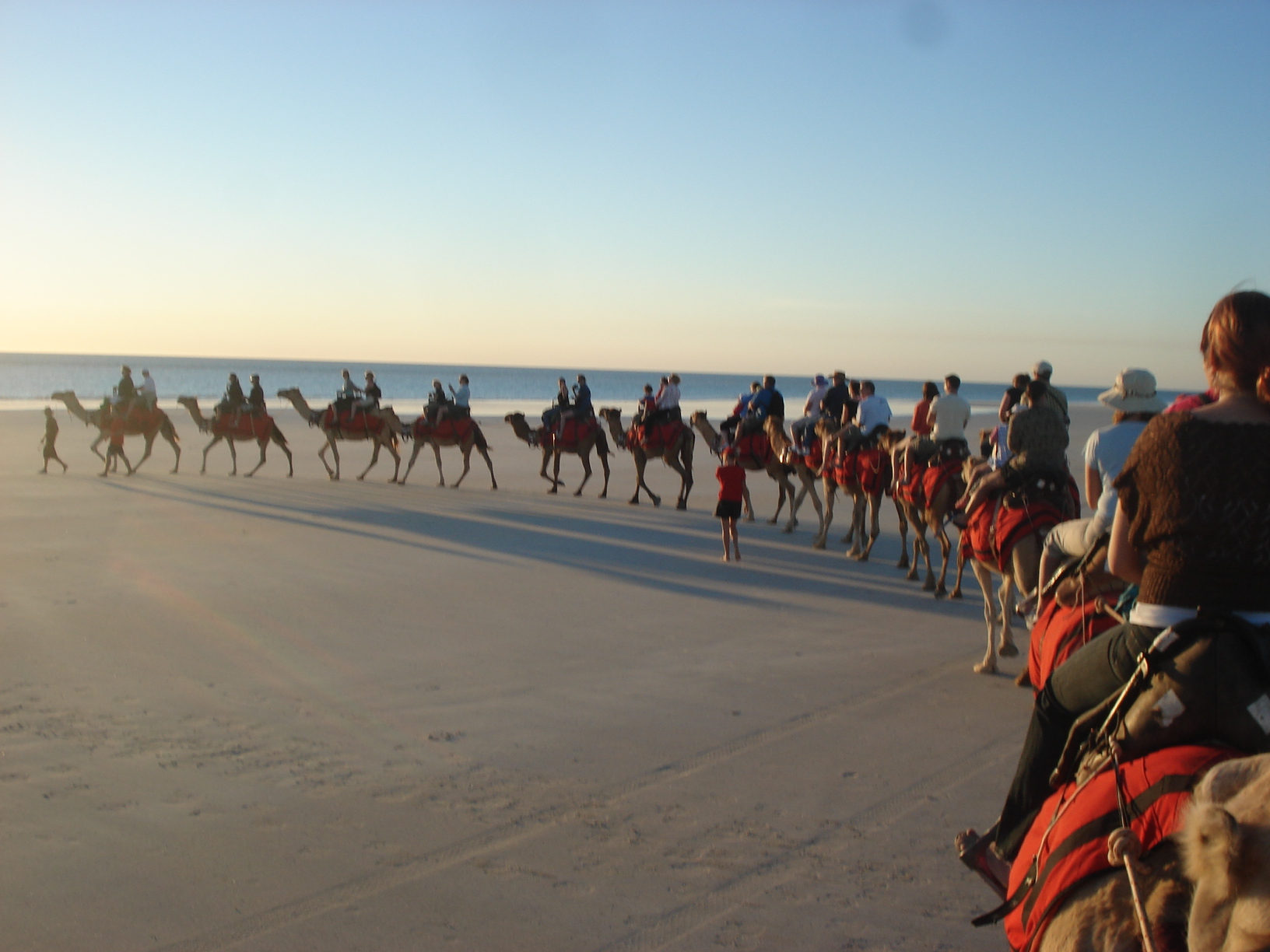 Western Australia was the state where my GAP Year (actually thanks to the WHV and the Tourist Visa I stayed longer than a year) started and the place where I spent more time during my stay Down Under.

It is Australia´s largest state, comprising 1/3 of its land mass therefore it offers a huge variety of landscapes – everything someone can wish for.

Broome is a lovely little town situated on the traditional lands of the Yawuru people and it is famous for Cable Beach which with its pearl white sand and turquoise water is simply amazing.

If you are interested in history you should visit the Broome History Museum where you can read about the history of Broome, the Aboriginal history of this area and the pearling industry. Below a very short sum up.
Broome became known thanks to the pearling industry which became important in the 1870s. It was named after the then Governor of the colony, Frederick N Broome and became the capital of the North Western region. Aboriginal who lived in this area were exploited by the pearling industry and became slaves working for the pearling industry. The boom in the pearling between 1889-1891 made Broome become the second largest port of the region.
World Wars I and II made the pearling industry re4gredire since over half of the population left to sign up for war. During the WWII famous for the Japanese attacks (to read more please refer to …) all Japanese were imprisoned for fear of a Japanese attack. On March the 3rd 1942 Broome was attacked on an air raid – at least 86 people lost their life that day.
After the war was over Broome managed to recover and nowadays it is considered one of the best places in the world to produce pearls. If you are interested in visiting one of the pearling farms you can visit Willie Creek Pearl Farm which I was told produces one of the best pearls in the world.

It is named in honor of the Java to Australia telegraph cable (to read more please refer to the article “Darwin”) which reaches shore here. Please be aware that from November to March it is the season of the box jellyfish – therefore be careful. Crocs have been sited but it is a rarity. Cable Beach is also famous for sunset camel rides which operate daily. Gantheaume Point is at the most southern end of Cable Beach – here you can discover what are said to be up to 130 million years old dinosaur footprints. Please remember that these can be seen at low tide. From the Lighthouse and if you are lucky you might be able to spot some dolphins and migrating whales.

If you stay one night in Broome I do suggest you go to the Sun Picture Garden cinema which is an outdoor cinema that screens multiple films each night. Soft drinks and snacks can be purchased onsite.

Before leaving Broome, we did some wwoofing at an aboriginal farm close to Broome. Here we had to take care of the kids & the camel. We were sleeping in a shed with no door and therefore I slept 10 days with my contact lenses (don´t do it) – I did it because there were loads of sounds around therefore I wanted to be able to figure out immediately which insect/animal was around. I have to admit that I have seen the funniest and scariest insects ever – saying that when I left Milan I wasn´t even able to cope with a small spider..Australia helped me to get over it not completely but I have made progresses.

We spent the following 4 nights/3 days at the Karijini National Park- set in the Hamersley Range in the heart of the Pilbara it offers a variety of spectacular sceneries. It is Western Australia´s second largest National park. This is said to be an ancient part of the Earth – the slow process of erosion has carved the shape of the land out of rocks that are said to be 2000 million years old. The iron formations are more than 2500 million years old and originated as iron and silica – rich sediment deposits accumulated on ancient sea – floor. Over millions of years these deposits were transformed by the pressure of further sediments laid down over them, forcing trapped water to be driven out and gradually turing the sediments into tough, well – bedded rock. Horizontal compression later caused the rocks to buckle, developing numerous vertical cracks, before lifting to the surface to from dry land. A sharp drop sea- level caused the rivers to cut down rapidly through the land, creating sheer – sided gorges. This combined with millions of years of erosion has formed this landscape.

Here you can make some encounters with the local wildlife such as red kangaroos, rock wallabies, bats, dingoes along with many native rodents, marsupial carnivores, reptiles and amphibians.

Please be aware that are entry fees and camping fees to pay.

The traditional owners of this area are The Banyjima, Yinhawangka and Kurrama Aboriginal people – therefore there are places in the ark which have important values for them such as Fern Pool and Circular Pool. Please enter the water quietly and do not climb or jump from the waterfall. The climate of this area is tropical semi -desert since the park is situated just north of the Tropic of Capricorn which means that during summer you can experience thunderstorms and cyclones with temperatures frequently over 40 degrees while in winter you will have warm days but cold nights. If you are planning to visit the Park by yourselves, you should rent a 4wheel drive.

There are many things to do and see such as gorgeous bushwalks, gorges and waterfalls. We did visit some of them – probably the most famous ones. Below a short info and some photos of what we have visited.

Starting with Fortescue falls which can be reached after an hour walk.

Oxers Lookout where you have spectacular views of the junction of the Red, Weano, Joffre and Hancock Gorges.

Fern pool as said before is a special place. It is said that it was created by great serpents n a time where the earth was soft. These serpents are said to be still living in gorge pools today.

Junction pool is called like this because it is where four gorges meet.

Hancock Gorge – even here you can choose between two trails but please be aware that both require a high level of fitness.

Mt Bruce is the second tallest peak in Western Australia. The Mount Bruce Summit route is a 9,5km long trail (around 5 hours walk) which leads up the western face of the mountain past Marandoo View (500m easy walk) to the end of the Honey Hakea Track (4,5km long track which takes around 2hours return) – the views from the top make it worth it.

Hamersley Gorge – a series of connected cascades are visible from the rim of this gorge. 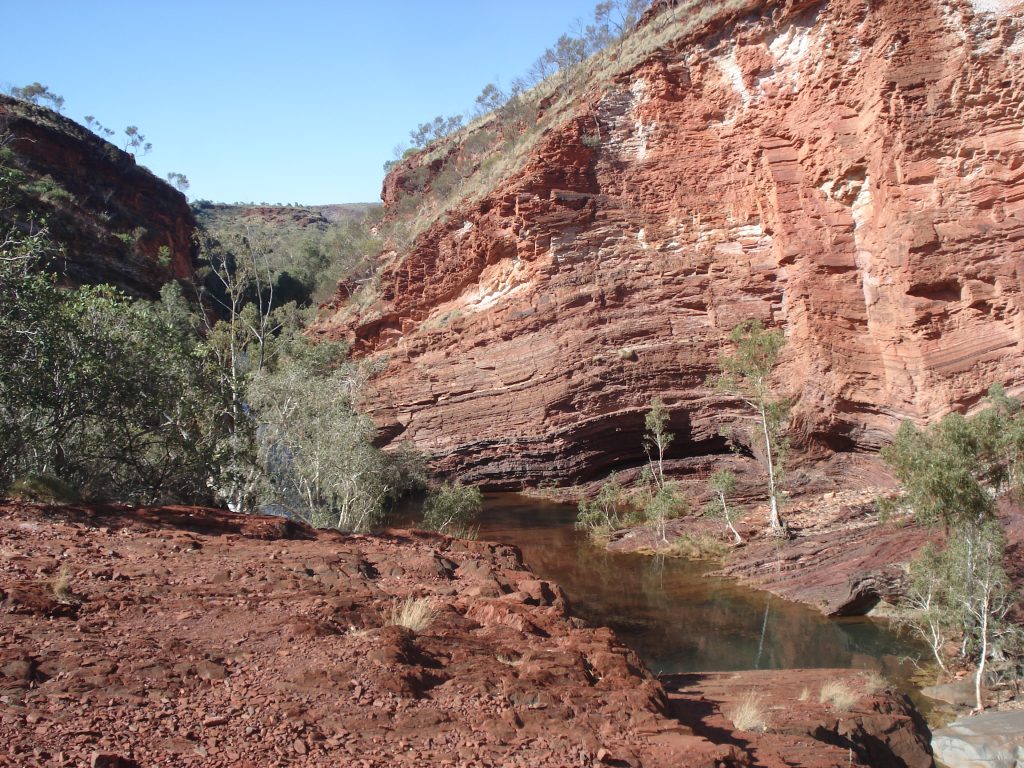 Exmouth was our next stop. We spent one just day here and we visited gorgeous Turquoise Bay where we did a Snorkel with the Manta Tour which was simply amazing.
To read more about the area please read “The Ningaloo Reef and the Cape Range National Park.

Shark Bay World Heritage Area was our next stop. This area received the UNESCO status in 1991 meeting 4 of the ten required natural criteria such as the colorful and diverse landscapes rare flora and fauna and world class examples of Earth´s ecological processes. Unfortunately, we did not spend a lot of time wandering around therefore it is a place where I would love to go back one day. This Area is famous for its unique ecological system of stromatolites (Hamelin Pool), sea grasses, marine life and rare endangered species such as the dugong.

It is also known for Monkey Mia and its Dolphins (to read more please refer to My 6 days volunteer work in Monkey Mia).

Other marine life that can be spotted are humpback whales which visit the area from August to October, Australian pelicans, sharks (such as the Tiger Shark), six types of rays, more than 6000 turtles are said to be living in this area. This area has a lot to offer such as pristine bays, lagoons and islands.

Shark Bay was discovered on October the 25th 1616 by Dutch Captain Dirk Hartog. in 1697 it was visited by Captain De Vlamingh and in 1699 by William Dampier. The guano, pearling and pastoral industries were important in the 1860´s – today it is famous for tourism, fishing, salt production and pearl farming. The traditional owner of the Shark Bay area are descendants of the Malgana tribe – “Gathaagudu” is the Aboriginal name of Shark Bay which means “two bays.

We visited two famous and gorgeous places of the area such as the Hamelin Pool and Shelly Beach.

Shelly Beach is an amazing pure white 70km beach that has been created naturally from hundreds of millions of tiny sea shells. Years back these shells were packed, cut into blocks and used for buildings constructed in Denham such as the Old Pearler Restaurant which is built almost entirely of shells. Shelly Beach is accessible by 2WD and has facilities such as toilets and a car park.

Hamelin Pool Marine Nature Reserve is the only Marine nature reserve in WA. This is said to be the only place where stromatolites can be seen from shore – please be aware that they are very fragile therefore there is a boardwalk from where you will be able to see them. Stromatolites are the oldest and largest living fossils on earth, believed to grow at a maximum of 0,3mm per year. But what exactly are stromatolites? Microscopic organisms invisible to human eye, concentrate and recycle nutrients which combine with sedimentary grains.

Monkey Mia and the Monkey Mia Dolphins Experience was my last stop but to read more about this please refer to My 6 days volunteer work in Monkey Mia.
There are a lot of other beautiful places to visit such as the Little Lagoon a gorgeous place with calm and clear water to relax, Francois Peron National Park famous for its red cliffs contrasting with the turquoise blue water (please be aware that some areas are only accessible via 4WD – entrance and camping fees applies) , Eagle Bluff lookout which features a high cliff offering views across Denham Sound and over to the Useless Loop salt pile – this area support the world´s largest meadows of seagrass and is therefore the best place to see dugongs and the Dirk Hartog Island National Park renowned for its gorgeous beaches, stunning rugged landscapes and is said to be one of the best diving spots. Hopefully I will be able to tell you more one day.